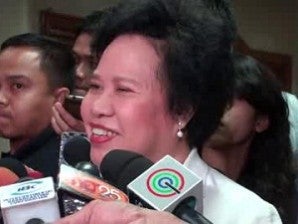 MANILA, Philippines—Senator Miriam Defensor-Santiago wants the government to put its money where its mouth is when paying tribute to the late Interior Secretary Jesse Robredo.

Santiago said that while Robredo deserved a state funeral, this was “all nominalism.”

“Let us all do something,” she said.

“Maybe even only as a voluntary movement, let us put up a trust fund for the kids, at least. I think that in order to honor his memory, government should at least provide a pension for the wife and the (three) children, because no one will support them anymore,” Santiago told reporters.

Santiago also suggested that Robredo’s wife, Leni, a lawyer, could run for mayor of Naga City.

“She was very intimate with her husband, as I observed, and they would have discussed many times political issues in Naga City,” she said.

Santiago expressed support for suggestions that the Commission on Appointments confirm posthumously Robredo as secretary of the interior although she said this was also nothing more than “nominalism.”

“It’s just an effort to show how much we think he should have remained in government, but it is not going to do him any more good,” she said.

The commission, composed of members of the Senate and the House of Representatives, had failed to approve Robredo’s appointment the past two years.