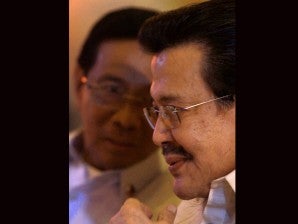 Former President Joseph Estrada does not want Vice President Jejomar Binay to replace Jesse Robredo as secretary of the Department of the Interior and Local Government (DILG), but approves of Senator Panfilo “Ping” Lacson’s plan to take over the helm of the DILG.

“Vice President Binay should stay on as housing czar because he is able to help a lot of people there,” Estrada said in response to reporters’ questions about his pushing for Binay for the DILG’s top post.

Estrada was in Sta. Ana, Manila, on Wednesday for the oath-taking of new members of his political party, Pwersa ng Masa.

Binay was reported in 2010 to have signified interest in the top DILG post, which has jurisdiction over the Philippine National Police, Bureau of Jail Management and Penology, Bureau of Fire Protection and local governments.

Asked to comment if Lacson, his former national police chief, would be appointed by President Aquino to replace Robredo, Estrada said, “Ping is OK at DILG, whatever the Palace wants.”

All talk of the replacement for Robredo should cease until after his interment, one of his party mates said Thursday.

Deputy Speaker Lorenzo Tañada III, also the spokesman of the Liberal Party (LP), said the party did not even have time to discuss the matter of finding an individual to fill Robredo’s shoes.

“This matter shouldn’t be discussed yet. Let us wait for our beloved secretary to be laid to rest before we speculate on who will replace him,” Tañada said at the Serye forum in Quezon City.

President Aquino also has a lot of things on his mind, he said.

Tañada said the President was still grieving for Robredo and at the same time preparing to choose the country’s next Chief Justice.

He also said that after the plane crash, the LP was busy praying for the safe return of Robredo, and then bringing his body home to his family. It is also focused on preparing for Robredo’s state funeral and burial, set on Tuesday.

Thus, there was no time to tackle Robredo’s replacement, he said.

As for the names being floated around as Robredo’s successor for the powerful interior and local government portfolio, Tañada said nobody from the LP was given the authority to release any name.

“That’s a very sensitive issue. That will be tackled at the right time,” he said.

Speculations have surfaced on who will replace Robredo, a multi-awarded and well-respected official who won accolades for the stunning transformation of his hometown, Naga City.

The DILG post is considered crucial in generating support, especially for the local elections.

Given the high regard that many people have for Robredo, there have also been numerous calls from social networking site users for the administration to choose an equally honorable replacement for the late secretary.

Public officials have likewise rushed to join the outpouring of praise for Robredo, with the members of the Commission on Appointments even trying to give him a posthumous confirmation.

But Tañada said that posthumous confirmation was against the rules of the commission, based on his own study of the Constitution.

Besides, the people viewed Robredo as their interior secretary, with or without confirmation.

“Ask anyone out in the street who is the secretary of the DILG. They don’t care if it’s an ad interim secretary or an officer in charge, the people will tell you it is Secretary Jesse Robredo,” he said.