Evelio Javier widow dies in US 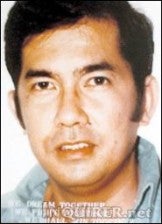 ILOILO CITY, Philippines—Precious Lotilla-Javier, the widow of slain Marcos-era opposition leader and former Antique Governor Evelio Javier, died in Los Angeles on Thursday (Friday in the Philippines) after years of battling cancer. She was 67.

Precious died in her sleep, according to former Antique Gov. Salvacion Zaldivar-Perez, a friend of hers.

Perez said the elder son of Precious, Francis Gideon, will be going to the United States to fetch his mother’s remains for burial in Antique beside the grave of her husband.  Gideon’s younger brother David is based in the US.

The youngest of six siblings, Precious is a member of the prominent Lotilla clan of Sibalom town in Antique.

A former teacher, she worked at an organization in Los Angeles which researches on deafness and ear ailments.

Lotilla said his aunt was an “extremely self-reliant woman who was strongly determined to live life to the fullest.”