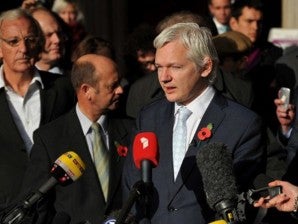 QUITO—Ecuador granted political asylum to WikiLeaks founder Julian Assange on Thursday, triggering a diplomatic confrontation with Britain, which angrily insisted it would extradite him to Sweden.

Ecuadoran Foreign Minister Ricardo Patino said that Sweden might one day send Assange to the United States, where he would not get a fair trial for publishing a trove of classified documents.

“The Ecuador government, loyal to its tradition of protecting those who seek refuge with us at our diplomatic missions, has decided to grant diplomatic asylum to Mr Assange,” Patino told a news conference.

The decision escalated a crisis that began on June 19 when the 41-year-old Australian tool refuge in the Ecuadoran embassy in London to avoid extradition to Sweden, where he is wanted for questioning in a sex assault case.

Assange supporters outside the Ecuadoran embassy in London cheered the news, and the WikiLeaks founder thanked Ecuador for its “courageous” decision.

“While today is a historic victory, our struggles have just begun. The unprecedented US investigation against WikiLeaks must be stopped,” he said.

Britain insisted it would carry out its “obligation” to extradite Assange regardless of Ecuador’s decision and Sweden summoned the Ecuadoran ambassador to explain Patino’s charge that that Assange would not get a fair trial.

Britain’s foreign minister William Hague warned the embassy that “harboring of alleged criminals, or frustrating the due legal process in a country, is not a permitted function.”

Washington denied it was lobbying Britain to take Assange into custody.

“With regard to the charge that the US was intent on persecuting him, I reject that completely,” State Department spokeswoman Victoria Nuland said.

“It is an issue among the countries involved and we are not planning to interject ourselves.”

The Washington-based Organization of American States scheduled emergency talks for Thursday to discuss the situation.

British police beefed up their presence outside the embassy, which is near the famed Harrods department store, with around 30 officers and nine vans stationed around the building.

“Nobody is going to scare us,” Ecuador’s President Rafael Correa said on his Twitter account, minutes before the decision was announced.

In 2010, WikiLeaks obtained and published online an enormous cache of US military documents on the war in Iraq and Afghanistan and diplomatic cables that deeply embarrassed the United States.

A US army private, Bradley Manning, faces trial in a US military court later this year for allegedly passing the classified material to WikiLeaks.

“If he were extradited to the United States, Mr Assange would not receive a fair trial,” Patino alleged.

“It is not implausible that he would be subjected to cruel and degrading treatment and be condemned to life in prison or capital punishment.”

Patino said Assange’s imprisonment in Sweden “would open up a chain of events” that could result in his extradition to a third country.

“As a result, Ecuador feels his arguments mean his fears are genuine, that he could be the victim of political persecution because of his decisive defense of the freedom of expression and the freedom of the press,” he said.

Patino said that if Britain did not grant Assange safe passage out of the country, he would remain “under the protection of our embassy.”

Spanish rights lawyer Baltasar Garzon, who is helping Assange’s defense, raised the possibility of taking the matter before the International Court of Justice in The Hague.

“Under our law, with Mr Assange having exhausted all options of appeal, the British authorities are under a binding obligation to extradite him to Sweden. We shall carry out that obligation,” a Foreign Office spokeswoman said.

“Our firm legal and constitutional system guarantees the rights of each and everyone. We firmly reject any accusations to the contrary,” he said.

Before the decision, British police at the Ecuadoran embassy arrested three protesters and put up barricades to keep back a crowd of about 30 Assange supporters chanting “Hands off, Ecuador!”