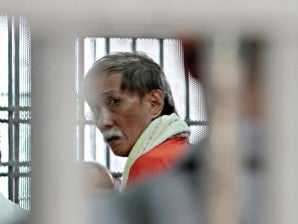 GO BACK TO JAIL Murder convict Rolito Go looks back as he is led inside the maximum security compound of the New Bilibid Prison in Muntinlupa City on Thursday. Go, who went missing for about 24 hours, claims he and his nephew were kidnapped on Tuesday night by four men inside the prison compound. GRIG C. MONTEGRANDE

Convicted road rage killer Rolito Go has been engaged in various business activities, ranging from moneylending to mining, while staying inside the New Bilibid Prison (NBP) in Muntinlupa City.

“He has made use of his skills as a businessman to build his own business inside the (state penitentiary),” said an NBP official, who declined to be identified for fear of reprisal from his superiors.

Go, who was sentenced to life imprisonment for killing student Eldon Maguan in 1991 over a traffic altercation, was running a lending business, with inmates and a number of jail personnel among his “regular borrowers,” the official said.

The murder convict usually required vehicles as collateral for the loans, which helped him start a used car trading business in Quezon City, he added.

When the Philippine Daily Inquirer went to the NBP on Wednesday, a day after Go was reported missing and purportedly taken out of prison by unidentified men, three sport utility vehicles (SUVs) were parked outside his kubol (nipa hut).

“Those vehicles were repossessed by Rolito Go after their owners failed to pay their loans,” the source said.

Despite his imprisonment since 1996, Go managed to put up a mining company to extract manganese in Zambales province and supervised another one, Sastrap Construction Corp.

“Aside from visiting his doctors and the office of his lending business in Soldiers’ Hills (in Muntinlupa), he is also known to go out of prison to check on his mining company’s operations and the sale of the manganese,” the prison official said.

Go has undergone surgery for colon cancer and walks around with a colostomy bag attached to his abdomen. His intestines are practically exposed, the source said.

The day before his disappearance, Go was believed to have been carrying cash amounting to at least P50,000, according to the NBP official.

Go had received the money from village officials who bought 290 pieces of bamboo poles from him, he said. The poles came from Quezon province, he added.

“I saw Go while he was supervising the bamboo poles being loaded on a truck. He sold the bamboo for P140 each,” the source said.

He said he last saw the convict at 6:20 p.m. outside his kubol at the back of the Ina ng Awa Parish. The hut is just a few steps away from the air-conditioned room once occupied by fellow VIP prisoners, former Zamboanga del Norte Representative Romeo Jalosjos and Claudio Teehankee Jr.

Richard Schwarzkopf, NBP superintendent, said he was “puzzled” by Go’s disappearance since he was supposed to finish his prison term in June 2013.

“That’s why we’re not yet discounting the report that he was abducted. We are closely coordinating with other law enforcement agencies,” Schwarzkopf said.

Too ill to be on the run

The source said it was unlikely for Go to slip out of prison “because he will not leave behind his vehicles.”

“Those vehicles are worth millions of pesos. Why would he waste that by escaping?” he said.

He also noted that Go was “too ill” to choose a life on the run.