Go ‘living out’ privileges revoked, to stay at prison hospital 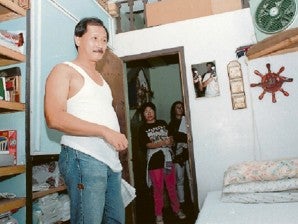 MANILA, Philippines—The New Bilibid Prison administration is “definitely” revoking jailbird Rolito Go’s “living out” privileges, after his disappearance from the national penitentiary on Tuesday night, and resurfacing in Alabang, Muntinlupa the following night.

Go, once turned over to the NBP from police custody, will be held at the prison hospital in the maximum security compound, NBP Superintendent Richard Schwarzkopf Jr. told the Inquirer.

“We can’t have him disappear again. If he needs treatment, the [prison] hospital can attend to him,” he said.

He maintained that they still consider Go an escapee, despite Go’s claim that he and his nephew and nurse Clemence Yu were kidnapped from the NBP, then taken to Batangas.

Go told the Philippine National Police that from Batangas, he and Yu took a bus to Alabang, where they surrendered themselves to police.

Before resurfacing, Go, a minimum security compound inmate with “living out” privileges, was last seen Tuesday evening at the Ina ng Awa Parish Church at the NBP reservation, supposedly doing church work near his hut in the area.

He was discovered missing during the physical headcount of inmates at the minimum security compound at around 10 p.m.Tuesday. On Wednesday morning, his sister claimed he was kidnapped, with the kidnappers asking for P1 million in ransom.

Go is serving time at the NBP minimum security compound for shooting dead  Eldon Maguan in a road rage case in 1991. Prison authorities said Go was set to be released next year. He is also regularly escorted outside the prison for hospital checkups for his colon cancer.

The “living out” privileges are part of the Bureau of Correction’s program for rehabilitation of minimum security inmates, Schwarzkopf said.  Under the program, the inmates are scattered across the reservation to do certain community assignments, some, as with Go, extending well into the night.

The superintendent admitted the NBP cannot ensure one-on-one guarding of the minimum security inmates as they perform their assignments, but said their officers are deployed to conduct regular headcounts.

Asked about reports of a kidnapping syndicate inside the national penitentiary, an incredulous Schwarzkopf said: “That stung. Never in our wildest dreams.”

He said, however, that they will continue to investigate the kidnapping angle.