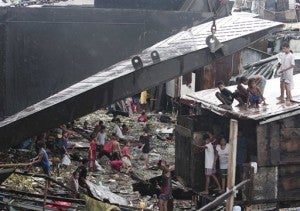 WITH the government talking again of relocating 100,000 informal settlers in Metro Manila, the Urban Poor Associates (UPA) is asking: Whatever happened to the ambitious plan to provide on-site or in-city housing for them?

“The plan was on-site, in-city or near-city housing. The President agreed to that,” UPA executive director Denis Murphy said in a phone interview Wednesday. “What happened to that? There’s no more talk about it.”

Instead, Murphy said, the news is about the “eviction” of slum dwellers.

Last year, the government announced a five-year, P50-billion project to provide on-site or in-city housing for more than 100,000 families living near “danger zones” such as estuaries, waterways, rivers and creeks. The resettlement was supposed to involve 20,000 families a year.

President Benigno Aquino approved P10 billion for the implementation of the project in 2011, and committed P10 billion a year for it until he steps down in 2016.

Part of the delay was the newness of the on-site or in-city plan, especially for the National Housing Authority (NHA), which was used to the Marcos-era practice of relocating squatters outside the metropolis, other officials said.

“This is an entirely new scheme, and the bureaucracy is not used to this,” Secretary Joel Rocamora of the National Anti-Poverty Commission (NAPC), which is part of the interagency body, said by phone. “Even the urban poor are new to this. [The] NAPC has to get involved to organize them.”

According to Rocamora, the NHA and the Housing and Urban Development and Coordinating Council were pushing for off-site housing, while the interagency panel was advocating in-city housing.

Murphy agreed. “Maybe the President is in favor [of in-city housing] but the whole middle-level management is against it,” he said. “The NHA people, they want the way things are now. They’re more comfortable with buying land in the countryside and shipping people out there.”

Rocamora said even the bureaucracy itself needed to be “roused” to speed up the housing program for slumdwellers because of the frequency of the flooding.

Interior Secretary Jesse Robredo said the plan was now “on-stream,” but admitted that only 9,000 to 10,000 slumdwellers would be relocated by yearend, or half of the annual goal of 20,000 families.

“It’s not as easy as buying a car,” Robredo said by phone, citing difficulties in finding relocation sites, the lengthy process of bidding and the rigorous consultation with the squatters on their preferences.

When will the houses be built?

But he said that building houses for 20,000 families a year was doable “as long as we can find a site.”

After last week’s flooding in Metro Manila, central and southern Luzon caused by two weeks of torrential monsoon rains, Robredo said the government would dismantle shanties and structures built on the banks of creeks, canals and other waterways to make way for flood-mitigating systems, and relocate 100,000 families over a five-year period.

But how many exactly really need to be relocated?

The Department of Public Works and Highways (DPWH) 2012 flood control master plan for Metro Manila and outlying provinces will result in the displacement of more than 735,000 people, mostly illegal settlers, not 100,000 as estimated by the Department of the Interior and Local Government.

The DPWH report, a copy of which was given to the Philippine Daily Inquirer, said, however, that the resettlement of squatters living on the banks of rivers and other waterways would benefit millions of people in the National Capital Region.

Patrick Gatan, head of the DPWH Project Management Office for Major Flood Control Projects, said the squatter resettlement program was a “perennial problem” in the implementation of public works projects.

But “it’s one of the project requirements prior to the actual implementation or construction of flood control structures,” Gatan said.

“The resettlement of both legal and illegal settlers has been part and parcel of flood control, road or bridges construction and other public works projects as DPWH secures what it calls project right-of-way,” Gatan said in an interview with the Inquirer.

According to the DPWH report, the Marikina large dam and the Pasig-Marikina River Improvement projects will displace 330,708 people but benefit 1.6 million others.

The Malabon-Tullahan River improvement project will require the resettlement of 39,456 squatters. It will, however, benefit 298,000 people.

The Meycauayan River improvement project will displace 35,320 squatters, but benefit 250,000 other people.

On the eastern side of Metro Manila, the East Manggahan floodway and Cainta-Taytay river improvement projects will call for the resettlement of 24,832 squatters. But the project will benefit 227,000 people.

The West Manggahan area drainage improvement project will displace 3,200 people, but benefit 25,600 others.

On the southern side of the metropolis, the West Laguna lakeshore land raising project will require the relocation of 114,000. It will, however, benefit 575,000 people living around the lake.

The South Parañaque-Las Piñas river improvement project will displace 30,278 squatters but benefit 104,000 people in the area.

Farther in the lake area, the land raising project for small towns around Laguna de Bay will require the removal of 299,879 squatters, but will benefit 1.5 million people.

The improvement of inflow rivers to Laguna lake will lead to the resettlement of 26,633 squatters. But the project will benefit 260,000 people.

No estimate of displacements and beneficiaries has been provided for the Valenzuela-Obando-Meycauayan river improvement project.

The DPWH’s 2012 master plan was based on a study funded by a $1.5-million grant from the World Bank and the Australian Aid for International Development.