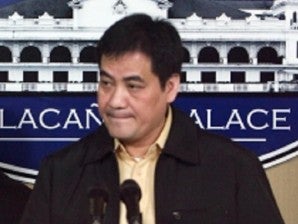 MANILA, Philippines—Malacañang on Wednesday commended the citizenry for taking  an active role against  a motorist , who berated and slapped  a traffic  enforcer of the Metro Manila Development Authority  (MMDA).

“We commend our vigilant citizens who actively seek accountability from individuals in both the public and private sectors,” presidential spokesperson Edwin Lacierda said in a statement.

“When people seek out and denounce the abusive, we see our citizens taking an active part in the President’s drive against the “wang-wang mentality.”

“This is a convergence that directly links individuals, through social and traditional media, to broader efforts to achieve social change, by bringing to light any possible wrongdoing,”  Lacierda said.

Lacierda issued the statement after a television network uploaded on YouTube a video showing a motorist, who was later identified  as Robert Blair Carabuena,  berating and  attacking  traffic enforcer  Saturnino  Fabros.

“Public engagement is the bedrock of democracy. It is at its most potent and powerful when the constant scrutiny of the citizenry serves as a deterrent to the illicit and unlawful,” Lacierda said.

“Let us all continue to channel our efforts towards permanently changing our individual and collective behavior for the better,”  the official added.

Read Next
Comelec shamed for purchase of expensive furniture, cars
EDITORS' PICK
House energy committee chair Arroyo bats for cheap electricity
Why Tagle is a leading papal contender
KWF has no power to ban, censor written works – Lagman
Powered by style, innovation and passion
A laptop that maximizes your WiFi so you can maximize your productivity
In Borongan, nuns play hoops (not mahjong)
MOST READ
Why Tagle is a leading papal contender
SRA officials should resign after ‘illegal sugar order’ – Zubiri
Arjo Atayde reveals proposal to Maine Mendoza was ‘more than a year’ in the making
Gilas gets solid core with Clarkson, Sotto planing in
Don't miss out on the latest news and information.