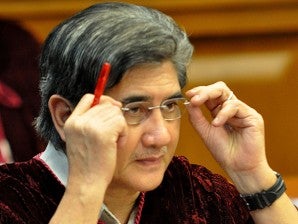 MANILA, Philippines – There may be a need for a new law on hazing, this is according to Senator Gregorio Honasan as called for a “total war on hazing” on Wednesday.

Honasan made the statement during the hearing of the Committee on Public Order and Dangerous Drugs joint with the committees on constitutional amendments, revision of codes and laws, and Justice and Human Rights on the implementation of Republic Act No. 8049 or the “Anti-Hazing Law.”

“The direction is towards preservation of life which according to law is principal,” Honasan said.

“We should declare total war on hazing,” he added.

The Senate hearing was initiated following the recent death of another San Beda law student in Cavite due to injuries incurred in a hazing incident during the initiation rites of a fraternity.

During the hearing, former Senator Joey Lina said that the law itself is sufficient but admitted that there are flaws in the existing RA 8049, pointing out that the title itself could be amended.

RA 8049 is entitled “An Act Regulating Hazing and Other Forms of Initiation Rites in Fraternities, Sororities, and Other Organizations Providing Penalties Therefor.”

Lina said that the title only states that it will regulate hazing but the provisions of the law may be interpreted by lawyers that hazing is totally banned.

“Hazing per se is banned if you interpret it and lawyers will interpret it that way,” Lina said. He also noted that the words “hazing” and “initiation” were used interchangeably in parts of the law which could lead to confusion.

Lina furthered that the law may be sufficient but it is only effective if it properly implemented.

He said that the best prevention of this crime is to ensure that the criminal justice system works.

“If the criminal justice works then it will serve as a lesson to anyone that if you violate the law, you will be caught, tried and punished,” he said.

He also urged the committee to address the issue on “lakaran ng kaso” or those high-profile alumni members of the concerned fraternities and sororities influencing the investigation and the decision of the courts on cases of hazing.

“It must be the swiftness and certainty of punishment,” Saguisag said.

“Laws alone cannot enforce themselves. There must be a system a process that will bring out the truth and will also help facilitate evidence gathering all the way to presentation in court and judgement,” Enrile said.

He also admitted that he was a member of a fraternity but said that no physical harm was done to him during his initiation rites.

For his part, lawyer Julito Vitriolo, executive director of the Commission on Higher Education, recommended that all fraternities, sororities and organizations be registered and those unregistered or underground be penalized. Vitriolo also requested that they be given “legal muscle” to address the issue on hazing within their agency.

Likewise, lawyer Theodore Villanueva, State Prosecutor of the Department of Justice (DOJ) asked that prosecutors be given authority to lead the investigation in cases of hazing.

Meanwhile, Honasan recommended to the DOJ to conduct an “audit” on the implementation of RA 8049 in previous cases and likewise, he requested the Philippine National Police to submit a report to the Senate Committee on how they have implemented the law.

The Senate hearing was initiated following the recent death of another San Beda law student in Cavite due to injuries incurred in a hazing incident during the initiation rites of a fraternity.