Clearing Manila Bay seawall of garbage to take a week—MMDA 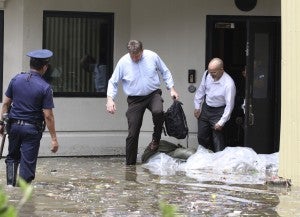 American embassy staff step into floodwaters with floating trash after office service was suspended due to the typhoon Gener (international name: Saola) on Aug. 1, 2012, along Manila’s Roxas Boulevard. Succeeding monsoon rains have caused more tons of garbage to be washed into the Manila Bay seawall. AP PHOTO/PAT ROQUE

MANILA, Philippines—The sight after the tide had ebbed from the seawall of the Manila Bay was revealing, an official of the Metropolitan Manila Development Authority said on Tuesday as the tons of garbage right in front of them have doubled.

Francis Martinez, head of the MMDA’s Metro Parkway Clearing Group, said it would take a week to clear the seawall of the mountain of trash along the Manila Bay.

The MMDA initially thought that the cleanup drive along the Baywalk where garbage was pushed ashore by the monsoon surges last week would take at least three more days.

“It’s bigger than what we’ve thought. The garbage was underwater and not too visible last week,” Martinez said over the phone.

Last week’s floods had aggravated the garbage problem, he added.

On Friday alone, the MMDA filled at least 22 dump trucks with garbage, mostly wastes made of plastic, styrofoam and rubber.

Over the weekend, around 800 MMDA personnel and volunteers cleaned up the docking area of the Manila Yacht Club, which has been previously swamped by garbage.