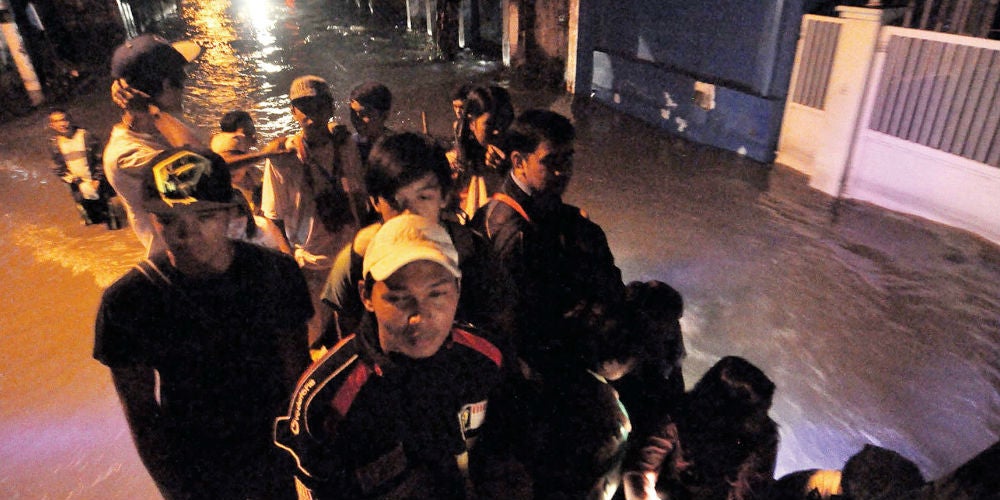 STORM WATCH Residents hitch a ride on a truck to cross a flooded street in Hagonoy, Bulacan, as Angat Dam releases excess waters in anticipation of more rains from Tropical Storm “Helen,” which is expected to hit northern Luzon on Wednesday. RICHARD A. REYES

Relief supplies were sent to northern Luzon Tuesday in preparation for Tropical Storm “Helen,” which was expected to dump heavy rains on other areas struggling with deadly floods.

“We are rushing to preposition relief items to the northern areas ahead of this storm,” Social Welfare Secretary Corazon Soliman said.

“We wanted to make sure that we have enough supplies there just in case areas get cut off by landslides or floods.”

Helen (international name: Kai-tak) was forecast to hit the east coast of Luzon, this morning, then pass over mountainous regions before heading toward Taiwan, the weather bureau said.

The storm was also forecast to bring heavy rains across the central and southern areas of Luzon, where 334,000 people remain in evacuation centers following flooding last week that in some farming areas remains waist-deep.

The floods, which submerged 80 percent of Manila, killed 95 people, according to the government.

At 6 p.m. on Tuesday, the weather bureau issued a yellow warning signal over Metro Manila, indicating moderate to heavy rainfall over the next three hours.

Within the 500-kilometer diameter of the tropical storm, rainfall is expected to pour at a heavy rate of 20 to 35 mm per hour, indicating intense torrential rains, it said.

As in the past weeks, the new weather disturbance is seen to enhance the southwest monsoon, which has dumped torrential rains over large parts of Luzon, especially the western section.

The Philippine Atmospheric, Geophysical and Astronomical Services Administration (Pagasa) said there might be flooding in low-lying areas and those located near the river or creek channels.

At 4 p.m., its eye was observed at 230 km east southeast of Tuguegarao City, packing maximum sustained winds of 85 kph and gustiness of 100 kph.

As of 9 p.m., the eye of Helen was observed at 120 km east southeast of Tuguegarao City, Cagayan.

“Helen should be out of the country by Thursday evening,” said Pagasa weather division chief Robert Sawi said in a briefing.

Storm Signal No. 2, with winds of 61-100 kph in affected areas, was hoisted over Cagayan, including Calayan and Babuyan groups of islands, Isabela, Apayao, Kalinga, Ilocos Norte, Abra and Batanes.

Pagasa said strong to gale force winds would affect the seaboards of central and southern Luzon and the Visayas, causing conditions at sea to be rough to very rough and spurring 3.4 to 4.5 meter waves.

In the Bicol region, the Philippine Coast Guard said it would not allow small sea vessels to sail.

But Bernardo Alejandro, Office of Civil Defense-Bicol director, said roll-on-roll-off vessels in the ports of Albay, Sorsogon, Masbate, Catanduanes and Camarines Sur were allowed to sail since there were no storm signal warnings raised over in Bicol.

He asked villagers to avoid taking the eight-hour boat trip to Maconacon and Divilacan towns via Santa Ana, Cagayan, due to rough seas and windy condition.

In Benguet, rains forced Philex Mining Corp. to recall work crews that were tasked with monitoring and cleaning up Benguet rivers following an accidental leakage at its tailing dam on Aug. 1.

The Department of Energy and National Grid Corp. of the Philippines (NGCP) are also bracing themselves for Helen’s onslaught.

NGCP, which operates and maintains the national transmission system, said in a statement that it had taken measures to minimize the impact of the storm on Luzon grid’s operations.

Its preparations included ensuring the reliability of communications equipment and availability of hardware and supplies for the repair of damaged facilities, and positioning of line crews in strategic sites to facilitate restoration work in affected areas.

Energy Undersecretary Josefina Patricia Asirit, meanwhile, said that all distribution utilities and electric cooperatives had prepared for the storm.

Pagasa hydrologist Roy Badilla said floodgates in six dams in Luzon remained open, although the water level in five dams was going down.

Ipo and Angat Dams in Bulacan, Ambuklao and Binga Dams in Benguet, San Roque Dam in Pangasinan, and Magat Dam in Isabela, released waters in anticipation of greater rainfall from Helen, Badilla said.

It’s a holiday in Bulacan on Wednesday, the province’s 434th Foundation Day, but everyone is busy helping out flood victims of weeklong monsoon rains while they prepare for the onslaught of another weather disturbance.