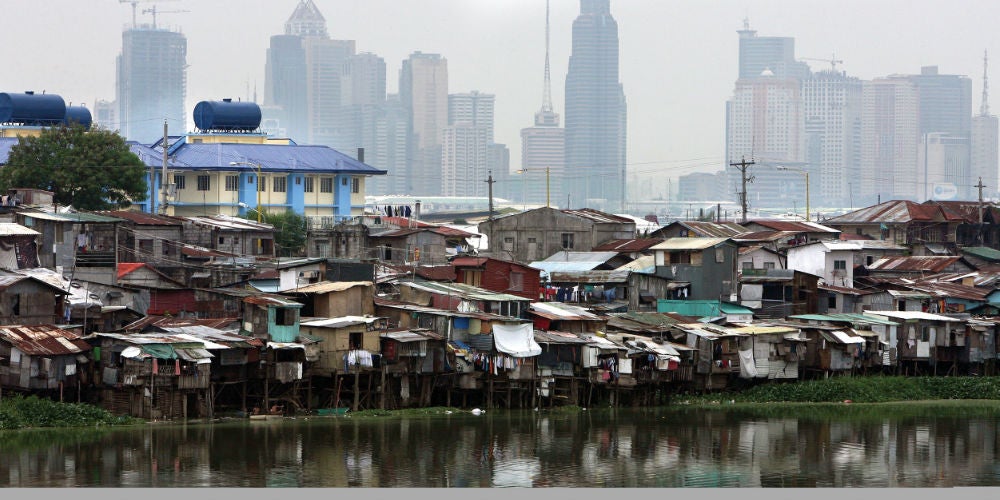 WATERWAY HAZARDS Shanties hug the floodway banks in Pasig City. In the background are the high-rise condominiums of Eastwood in Libis, Quezon City. The government has announced it is ready to relocate residents living along the waterways of the metropolis. EDWIN BACASMAS

The squatters’ colonies blocking major waterways in Metro Manila will soon be but a bad memory.

He said shanties and other illegal structures built along creeks, canals and other waterways would be dismantled to allow the construction of flood-mitigating systems.

Public Works Secretary Rogelio Singson said as much on Monday, saying government would “blast” the houses of informal settlers and other blockages that worsen flooding. He was blasted by urban poor groups.

Blast the shanties? Not even the late strongman Ferdinand Marcos issued such a threat, bristled the leader of Urban Poor Associates (UPA).

“Did you hear the language used about poor people? Singson said he’d blow up homes. Did you ever hear that before, even during the Marcos’ years?” UPA executive director Denis Murphy said in a phone interview.

The poor would be “shocked” to hear this, added Murphy, a former Jesuit priest who had been working with the urban poor in Metro Manila since cofounding the UPA.

“Blow up the houses of people, as if they were bandits, crooks or robbers, and the government has to go in, and bomb them? I think the poor would be shocked to hear those words,” he said.

Faced with the furor, Singson said that when he talked about blasting structures, he was referring to the blasting of illegal fish pens in the Pampanga delta during the watch of then President Fidel V. Ramos.

“There will be no blasting of illegal occupants in Metro Manila,” he said by phone. “I’m not that violent.”

Robredo said “we have actually taken the first step when we started the inventory of informal settlers (in Metro Manila) and where we could locate them.”

Robredo also said the target is to complete relocation within five years.

Robredo said an interagency body tasked with finding a solution to the perennial problem of flooding in Metro Manila had asked President Aquino to earmark P10 billion for the relocation project.

But Robredo acknowledged that the interagency body was having difficulties finding the areas where the affected residents would be transferred, noting that the law mandated permanent shelters to the relocated informal settlers.

“The law also stipulated that the resettlement areas should be within the city or at least near the city. This is the (policy) that we should observe,” he said.

Robredo said the interagency body had found an area in Pasay City where the government could construct permanent housing units.

“The government has started the negotiations for a property in Sitio Imelda property in Quezon City. That is about four to five hectares,” he said.

He said the President himself had joined him and other government officials in surveying idle public lands along the Pasig River where the government could build medium-rise residential buildings.

“The challenge is for the government to ensure that these solutions to the flood problem would be fully implemented because we cannot just turn our back and abandon the projects,” he said.

Robredo said the government had started the bidding process for the first 9,000 housing units for those who would be displaced from priority areas.

“Even before the flooding caused by the recent monsoon rains happened, the interagency council was already doing its task,” he said.

Medium-rise buildings (MRBs) will soon be constructed in viable sites in Metro Manila to serve as permanent relocation sites for informal settlers, according to Vice President Jejomar Binay.

“While the MRBs are still to be constructed, the most viable option for relocating these families would be to use the available resettlement sites on a temporary basis,” said Binay, also the NHA chair.

He said 5,363 families in Quezon City, Malabon, Navotas, San Juan and Mandaluyong would be relocated to resettlement buildings of the NHA in Bulacan and Rizal within the week.

Of the families the NHA identified for relocation, 2,400 are from Manggahan, Pasig; 1,500 from Navotas; 970 from Happyland, Tondo; and Nagtahan and Islang Puting Bato in Manila; 200 from Malabon; 150 from Litex in Quezon City; 75 from San Juan; and 68 from Mandaluyong.

A total of 979 families, who were earlier relocated from Tondo to Rodriguez, Rizal, just before last week’s monsoon rains, were also affected by floods and had to be moved to higher ground.

“I have directed the NHA to determine whether or not to totally abandon the site. If it is still suitable for residential purposes, we need to come up with measures to mitigate flooding in the area,” Binay said.

Singson said there were 645 structures, including shanties and fish pens, blocking the flow of water in the Pampanga Delta, but these were not being “blasted.”

“These are not light materials, but made of concrete. We’ve talked to the mayors, and they’ve asked them to leave. They’re voluntarily leaving their homes, and coming back to recover some materials,” he said. “We’re not blasting them.”

He said the clearing of the waterways was the prime responsibility of an interagency committee created by the President, not the Department of Public Works and Highways.

He said he did not talk either of blasting fish pens in Laguna de Bay.

Lamenting that the poor were always blamed for the flooding, Murphy said he was willing to do a joint inspection of the dwellers along esteros (estuaries) with government officials, and count families blocking the waterways.

Murphy also wondered where the government would source funds for the relocation, and where to relocate this large number of informal settlers.

He said the relocation could cost billions of pesos, if the NHA’s estimated cost of relocating a family at P150,000 was used as basis.  “They always plan in a grandiose way but they don’t look at the details,” he said.

A labor group and a migrants’ rights organization also slammed the administration.

“No heart, no consideration and empty bravado. They are forcing urban poor families to self-evict to where? Are there decent houses waiting for them? Even the government’s relocation sites are flood-prone and more dangerous,” said Migrante International chair Garry Martinez.

The Associated Labor Unions-TUCP said Singson’s uncalled for remarks tended to incite a “war” between the government and the working poor.

“The mindset of President Aquino and the remarks of Secretary Singson are incendiary statements which incite and threaten the working poor to take action against the government in defense of their well-being. These two public servants forgot that these informal settlers, too, are victims of the flood,” said Gerard Seno, national executive vice president of ALU-TUCP.  With a report from Tina G. Santos