‘Gloria Macapagal Arroyo must get 2nd opinion in New York’ 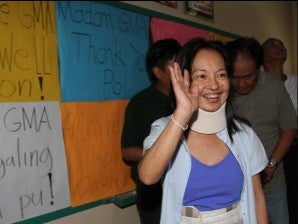 MANILA, Philippines—The cardiologist who said that former President Gloria Macapagal-Arroyo had a “life-threatening” blockage in her neck has advised the Pampanga representative to seek a second opinion from a specialist in New York, according to Arroyo ally, Quezon Rep. Danilo Suarez.

Dr. Roberto Anastacio “[insisted] that she get a second opinion, but not here,” said Suarez, who visited Arroyo at Makati Medical Center.

Arroyo was taken to MMC on Monday for an examination after the titanium plate supporting her cervical spine was dislocated.

In an Aug. 11 medical bulletin issued by MMC, Anastacio said the displaced titanium plate was “a serious factor in the mechanism of breathing and subsequent blood circulation, which may lead to sudden death.”

The cardiologist also said Arroyo was suffering from a “30 to 40 percent” obstruction in her right coronary artery and left descending artery.

Anastacio suggested in the Aug. 11 bulletin that Arroyo consider his “serious suggestion of a reinvestigation and second opinion.”

According to Suarez, Anastacio had suggested that Arroyo get a second opinion from a “neurocervical” doctor, of which there is none available in the Philippines.

“It should be a surgeon who does this every day,” he quoted the doctor as saying.

Anastacio canvassed specialists abroad who could examine the former president and suggested a doctor in New York, said Suarez.

The congressman on Tuesday said a lump was detected in the former president’s left breast after an examination. He did not provide details.

He said Arroyo had lost so much weight and was now down to 91 pounds.

She is able to move around her hospital room while hooked up to an IV drip, he said.

Suarez said Arroyo should be given a chance to seek treatment in other countries.

“When we’re talking of life and death, all leeway should be given to a person,” he said.

But he acknowledged that the hold-departure order issued against Arroyo over pending cases of graft, plunder and electoral sabotage would be a problem.

Arroyo’s attempt to leave the country for treatment last November—backed by a Supreme Court ruling lifting the watchlist order against her—was thwarted by immigration officials on orders of Justice Secretary Leila de Lima in a dramatic airport showdown.

But under the rules, an accused in a criminal case is allowed to file a motion seeking court permission to travel abroad for a specific period. It is up to the court to determine if the reason given is compelling enough to allow the accused to leave the country temporarily.

The former president last year underwent three surgeries in her cervical spine to deal with severe pain in her upper limbs caused by compressed nerves in her neck. Surgeons placed a titanium plate on her spine.

Just three days after her release from detention early this month, Arroyo was rushed to the hospital after choking on a piece of melon. Arroyo has extreme difficulty eating and swallowing even water, her doctor said.