In Tarlac, Aetas take first step to be voters 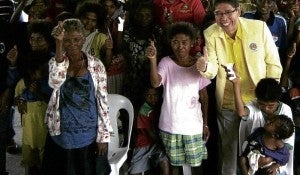 THUMBS UP FOR IP VOTE Elections Commissioner Rene Sarmiento poses for a souvenir photo with some of the first Aetas to register as voters under the Comelec’s program to reach out to indigenous peoples to make them part of the electoral process. JO CLEMENTE/INQUIRER CENTRAL LUZON

CAPAS, Tarlac—Carrying her 2-year-old son, Anes Pilaso, an Aeta mother, trekked the hills from her community in Sitio Manalag to the center of Barangay Sta. Juliana here on Monday.

On ordinary days, the trek takes about six hours. But on Monday, it took them longer as they passed through chest-deep waters in two rivers.

Pilaso, 20, and 43 others from her sitio went downhill to take part in a special voters’ registration organized by the Commission on Elections (Comelec) for indigenous peoples on Tuesday. They spent the night at the Sta. Juliana barangay hall to be early for the registration.

The first to be held in the country, the special registration for IPs is a project led by Elections Commissioner Rene Sarmiento, who said special groups, such as IPs and people with disabilities, should be given special attention so they could vote.

“The enthusiasm of the IPs is overwhelming and I am so happy. They defied nature, walked kilometers, and the efforts they exerted just to be here is something. If this would be used as basis, there is a future for this country. They are a source of inspiration,”  Sarmiento said.

This enthusiasm, he said, reflects the IPs desire for empowerment.

“Part of dignity is empowerment and the direction of the Comelec is to empower the vulnerable and marginalized. Giving them special attention makes that empowerment visible,” he said.

The next step in the process, he said, was voter education.

He called on the Parish Pastoral Council for Responsible Voting  and civil society to join the process.

“We need to impart to IPs the kind of voter education that would help them overcome fear of technology in  light of the automated election as well as the other substantive components in the free exercise of the right to vote,” he said.

Tarlac’s Aeta community is concentrated in Capas. At least 200 were expected to register on Tuesday from the estimated 6,000 IPs in the area.

“Even as the Comelec has been doing the rounds of barangays for voters’ registration, having a day specially for these groups is helpful,” said lawyer Cristina Guiao, Tarlac election supervisor.

As most of the registrants could hardly read and write, Comelec people and staff from the National Commission on Indigenous Peoples  helped them fill out forms.

Capas, too, is the first local government in Central Luzon to have an IP representative in the town council.

Councilor Kennedy Molina, who joined the council in January, said the Aeta community was happy that finally, “we are being noticed.”

“We can say we are now part of the Filipino people and the law on indigenous peoples is working,” Molina said.

Pilaso, a first time voter, said she was happy to register and hoped to return in May next year to vote.