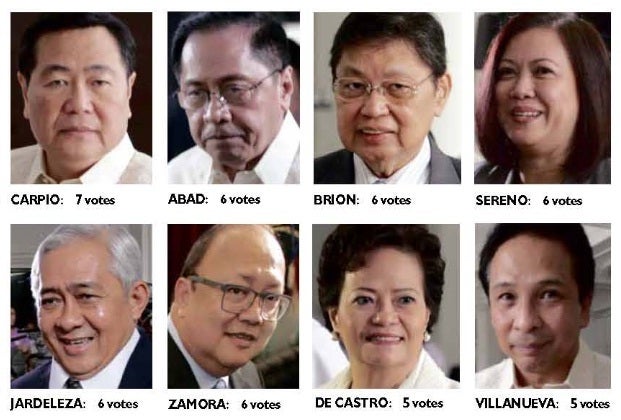 Acting Chief Justice Antonio Carpio topped the short list of eight candidates that the Judicial and Bar Council (JBC) announced on Monday, but a senator said he believed the next Chief Justice would either be Associate Justice Lourdes Sereno or Solicitor General Francis Jardeleza.

Sereno is President Benigno Aquino III’s first appointee to the high tribunal who held the minority view in its recent ruling regarding the just compensation to workers of Hacienda Luisita, which is owned by his family.

Sen. Panfilo Lacson told reporters he had information that the choice for the post of ousted Chief Justice Renato Corona would be a toss-up between Sereno, 52, and Jardeleza, 62.

“That’s not a fearless forecast.  I just heard that they are the front-runners but don’t take it seriously,” he said.

Palace insiders told the Inquirer that the front-runner was Jardeleza, who has been criticized for his role as lawyer in the questionable use of coconut levy funds administered by Cojuangco during the regime of the late dictator Ferdinand Marcos to acquire shares of stock in San Miguel Corp. Jardeleza later became corporate counsel in SMC, of which Cojuangco is chair.

The Supreme Court still has pending cases to resolve in connection with sequestered SMC shares now worth more than P100 billion.

During the JBC interviews, the 62-year-old Carpio expressed fears that the appointment of an outsider as Chief Justice would lead to demoralization in the judiciary following the emotional Senate trial that removed Corona. Carpio then denied Corona’s claims that he had conspired with Malacañang to oust his erstwhile rival.

Justice Secretary Leila de Lima, regarded as Malacañang’s choice, was not on the short list announced on Monday by the Supreme Court from which Mr. Aquino will choose Corona’s replacement.

A last-ditch effort to put De Lima on the list failed after a JBC member said she had failed to get a consensus among the eight members to suspend its rules that prohibited the consideration of nominees with pending administrative cases.  De Lima is facing disbarment cases for badmouthing Corona and ignoring a Supreme Court order.

Carpio got the most number of votes, seven, according to Supreme Court spokesperson Gleo Guerra. The lone JBC member who did not vote for Carpio was Sen. Francis Escudero, according to two members who spoke on condition of anonymity for lack of authority to discuss the matter.

Commentators have suggested that Abad could be a good interim choice for Chief Justice in the wake of Corona’s ouster. At 68, Abad has only two more years to serve before reaching the mandatory retirement age of 70.

He told the JBC during his interview that the Corona trial had “wounded” the judiciary and an insider was necessary to do the healing.

Guerra said that the JBC would send the short list of nominees to Malacañang Monday afternoon. Under the Constitution, the President has until Aug. 27 to appoint the new Chief Justice.

Iloilo Rep. Niel Tupas Jr., a JBC member, said the council ended up submitting eight names to the President after deciding that “whoever gets five votes will be listed.”

Tupas said De Lima was disqualified because the JBC was unable to reach a consensus on a motion filed last week by a JBC member, Malacañang Undersecretary Michael Frederick Musngi, for the council to suspend its rules on the disqualification of nominees.

“We did not get a consensus so we did not put it anymore to a vote,” Tupas said.

The JBC rules bar the nomination of applicants to judiciary positions who have pending regular administrative and criminal cases, among others.

A disappointed De Lima told reporters she did not know how to react to her outright disqualification. “Why was I singled out for disqualification? That’s what I want to ask,” she said, abruptly cutting off further questioning.

De Lima, 52, had been counting on the JBC to keep her nomination alive after the Integrated Bar of the Philippines (IBP) twice rejected her appeal to dismiss the disbarment cases against her.

The cases against De Lima stemmed from her alleged disparaging remarks against Corona and her defiance of a Supreme Court temporary restraining order against her directive banning former President and now Pampanga Rep. Gloria Macapagal-Arroyo from leaving the country for medical treatment even in the absence of a criminal charge.

De Lima had told both the IBP and JBC that the disbarment cases against her were politically motivated.  She had said she had the lock on Corona’s post because of her closeness to Mr. Aquino—a boast that sparked fears that the next Supreme Court chief would be Malacañang’s “stooge.”

Tupas said the JBC “reconsidered” the nominations of two other applicants for Chief Justice who had been previously deemed disqualified because of pending cases—Jardeleza and Securities and Exchange Commission Chair Teresita Herbosa.

He said Jardeleza’s case in the Supreme Court had not been acted upon and could not be “considered yet a pending administrative case under JBC rules.”

The administrative case against Herbosa was dismissed on Aug. 1, according to the Supreme Court. But because Herbosa got only four votes, she was not included on the short list.

Tupas disclosed that Supreme Court justices had their own choices of nominees and that these were sent to the JBC as a “guide.”

But he said he did not consider it when he voted. “We just voted based on our individual lists, which we prepared even before the voting,” he said.

On Sunday, former Solicitor General Frank Chavez said the JBC was inviting lawsuits if it amended and suspended its rules on disqualification of nominees in the midst of its deliberations ostensibly to favor De Lima.

Lacson was beaming ear to ear when word got out that De Lima was out of the running. “Basta, I’m happy,” he told reporters.

Lacson and De Lima have been at loggerheads since the justice secretary insisted on not honoring the Court of Appeals’ decision to cancel a lower court’s order to rescind an arrest warrant against the senator. This was in connection with Lacson’s alleged involvement in the murders of publicist Salvador “Bubby” Dacer and driver Emmanuel Corbito in 2000. The arrest order has since been dismissed.

Sen. Francis Pangilinan said De Lima’s noninclusion on the short list should quiet speculations that pressure was exerted on the JBC.  “This indicates that there was no pressure, that the JBC made the selection based on rules,” he said.