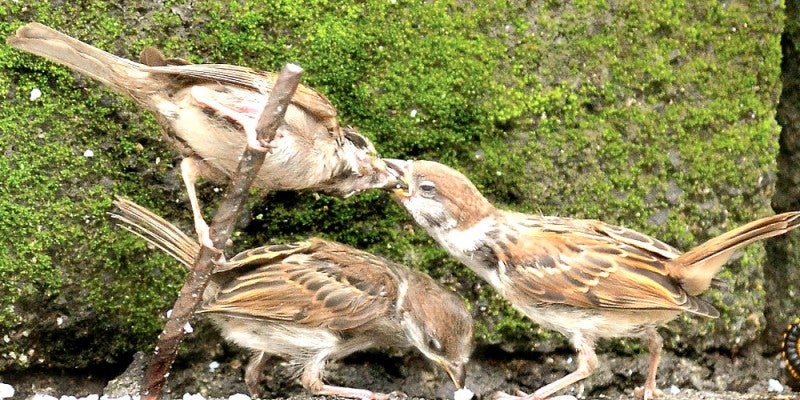 FOOD RELIEF Days of nonstop monsoon rains that flooded many communities in Metro Manila last week have also displaced the common “maya” from their usual food sources. At the back of a house at Filinvest subdivision in Cainta, Rizal, three of the birds, also called Eurasian tree sparrow, seem to be enjoying the sunlight and leftover food. AUGUST DELA CRUZ

Brace yourselves for more rains and flash floods. The low pressure area spotted east of northern Luzon has developed into a tropical depression, and it is called “Helen,” the weather bureau said Sunday.

The new storm comes as the death toll from days of torrential rains last week that submerged large swaths of Metro Manila and other parts of Luzon rose to 85.

Pagasa warned residents and local disaster coordinating councils in these areas to be on alert because the rains could trigger flash floods and landslides.

As of 4 p.m. Sunday, the center of Helen was spotted 750 kilometers east of Casiguran, Aurora. It was moving west-northwest at 11 kilometers per hour.

Forecaster Connie Dadivas said Helen, packing winds of 55 kph near the center, would enhance the “habagat” (southwest monsoon) and bring rains to southern Luzon, the Visayas and Mindanao, particularly the western section.

Metro Manila, which is still reeling from last week’s unremitting rains, may be hit Monday by isolated rain showers and thunderstorms.

While floods have gone down significantly around Manila, many areas in nearby provinces remained inundated as overflowing dams continued to release water, the national disaster coordinating agency said.

“Helen is not expected to make landfall,” but it may bring scattered rain showers over Metro Manila and the rest of Luzon by Tuesday or Wednesday, Dadivas said.

She pointed out that the weather system would most likely bring heavy rainfall to Bicol.

The volume of rainfall within the 350-km diameter of the tropical depression is from heavy to intense at 10 mm to 20 mm per hour, Pagasa said.

The death toll from last week’s nameless weather disturbance, which brought Metro Manila and outlying provinces to their knees, climbed to 85, according to the National Disaster Risk Reduction and Management Council (NDRRMC).

The fatalities from the floods spawned by the monsoon rains topped the 53 reported deaths when Tropical Storm “Gener,” which later became a typhoon, battered much of Luzon two weeks ago.

At the height of the flooding, the authorities claimed that the casualties had been minimized due to the government’s immediate response to the disaster.

But Benito Ramos, NDRRMC executive director, acknowledged that the actual picture of the devastation could be grimmer as the state agency was still receiving reports from flooded areas.

Ramos said the council and local government officials were closely monitoring several villages in Camanava [Caloocan, Malabon, Navotas and Valenzuela], one of the hardest-hit areas in the metropolis.

Although floods have subsided since Friday, mounds of garbage litter residential areas in northern Metro Manila, he said.

“The garbage washed away by the floods posed great health risks to the victims of the flooding,” Ramos said.

The health department said water purification tablets were being distributed, while mass immunizations were being carried out to prevent an outbreak of colds, flu and other diseases.

Of particular concern is a possible outbreak of leptospirosis, a bacterial disease caused by exposure to water contaminated by rat urine.

More than 3,300 people were infected and 249 died of the disease in the aftermath of similar flooding in 2009, the biggest casualty figure for leptospirosis in the world, health authorities said.

“Many may have escaped the floods, but many could still die from leptospirosis or other diseases,” Ramos said.

As of 5 a.m. Sunday, the NDRMMC reported that 85 people had perished because of the floods, 62 of whom drowned.

Twelve people, including nine family members in Quezon City, were killed in six landslides triggered by the torrential rains.

He said at least 10 people were reported injured while eight others remained missing.

A total of 62,846 people were rescued by government and private teams from the swamped villages in Luzon.

The NDRRMC placed the damage to infrastructure and agriculture at P604.63 million.

In Metro Manila alone, Ramos said more than P400 million worth of medical facilities were destroyed by the rains that inundated a number of public and private hospitals and stranded members of the hospital staff and their patients.

The NDRRMC said a total of 8,428 houses were either totally or partly damaged by the floods, forcing 768,989 people to flee their homes.

The agency said 430,125 people were still staying in 948 evacuation centers in Luzon and Western Visayas, while 338,864 individuals had moved to the homes of relatives.

It said about half of these affected areas experienced severe flooding. At least 10 roads and three damaged bridges in flooded areas were still closed to traffic.

Chief SuperintENDENT Leonardo Espina, director of the Highway Patrol Group, said the Calumpit-Pulilan junction of the MacArthur Highway in Bulacan as well as the Apalit-San Simon junction of the North Luzon Expressway in Pampanga, and a portion of a highway in San Fernando, Pampanga, remained impassable to light vehicles.—With a report from AFP