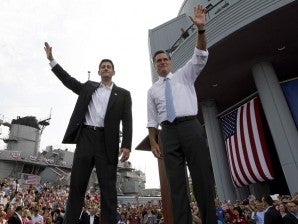 NORFOLK, Virginia — US presidential challenger Mitt Romney raised chuckles on Saturday when he flubbed his lines introducing his vice-presidential running mate and inadvertently named him top of the ticket.

Presenting Congressman Paul Ryan to a crowd of supporters in front of a mothballed warship in the port city of Norfolk, Virginia, Romney gave the rising star of the Republican Party an unexpected promotion.

“Join me in welcoming the next president of the United States, Paul Ryan,” he said, before correcting himself as laughter erupted.

Romney made light of the slip, which might reinforce the view of some commentators that he risks being overshadowed by his younger deputy, joking about his reputation for misspeaking in public.

“Every now and then I’m known to make a mistake,” he admitted. “I did not make a mistake with this guy. But I can tell you this, he’s going to be the next vice president of the United States.”

Doubtless the Republicans will play down the brief slip, but they can hardly complain if Democrats have some fun with it.

In 2008 when Barack Obama, now the sitting president and Romney’s opponent in November’s poll, was running for office, he too accidentally introduced his vice-presidential pick Joe Biden as the “next president”.

A spokesman for Obama’s then opponent, Republican Senator John McCain, dubbed the gaffe a “Freudian slip” suggesting that the young Obama needed a political veteran like Biden as a mentor.