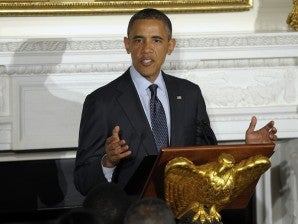 President Barack Obama celebrates the Islamic holy month of Ramadan by hosting an iftar dinner in the State Dining Room of the White House in Washington, Friday, Aug. 10, 2012. AP/Susan Walsh

“As a member of Congress, Ryan rubber-stamped the reckless Bush economic policies that exploded our deficit and crashed our economy,” Obama’s campaign manager Jim Messina said in a statement.

“In naming Congressman Paul Ryan, Mitt Romney has chosen a leader of the House Republicans who shares his commitment to the flawed theory that new budget-busting tax cuts for the wealthy, while placing greater burdens on the middle class and seniors, will somehow deliver a stronger economy.”

Messina highlighted Ryan as “the architect of the radical Republican House budget” and said he backed Romney’s plans for a $250,000 tax cut for millionaires, and deep cuts in education spending.

And with an eye on a crucial voting demographic, Messina said Ryan’s budget would end the cherished Medicare health care system for seniors and turn it into a voucher system.

“Now the Romney-Ryan ticket would take us back by repeating the same, catastrophic mistakes.”