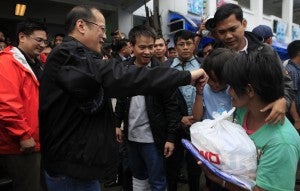 A ring-road dike along Laguna de Bay. Embankments and catch basins in the Marikina River watershed. An 8-kilometer dike and pumping station in the Camanava (Caloocan, Malabon, Navotas and Valenzuela) area.

President Benigno Aquino announced Thursday these three infrastructure projects that he said could be finished in two to three years to address the perennial flooding in the metropolis and nearby areas.

“It’s not in my nature to engage in flattery,” the President told the evacuees, vowing to complete the three antiflood projects before the end of his term in 2016.

“I won’t flatter you … but I can finish this,” he said, adding: “We already have a funding source for this.”

It was in Barangay (village) Nangka, his first stop, where Mr. Aquino started talking about his flood control projects.

The President said the public works department would soon construct embankments and catch basins at the upstream portions and tributaries of the Marikina River to slow down floodwaters cascading into Metro Manila during heavy rains.

Public Works Secretary Rogelio Singson, who was with the President, said slowing down floodwaters from the mountains in Antipolo, San Mateo and Rodriguez, all in Rizal province, would allow the drainage systems to efficiently carry rain water into the sea.

“So what we could do it is impound water upstream, so that water levels won’t increase downstream simultaneously,” Singson said.

The President vowed to release by next week specifics of this project.

In his second stop in Barangay Silangan in Quezon City, he asked residents to be patient because the project could not be finished overnight.

In Valenzuela City, the President revealed a plan to build an 8-km dike and pumping station to be built in two to three years at a cost of P2.2 billion.

The dike will also benefit Obando and Meycauayan towns in Bulacan because it will be constructed along the Meycauayan River.

He expounded on this project when he was with Valenzuela City Mayor Sherwin Gatchalian at a school, which was turned into a relocation site, telling evacuees that “we will explain this clearly by meeting all local government officials covered by this project.”

In the afternoon, the President was interviewed by the media at Oreta Sports Center in Malabon, where he disclosed yet another project, this time a dike to address floods in 18 lakeside towns in Laguna.

“There’s a body of water south of Metro Manila called Laguna Lake. And the plan was just to dredge it. It fills up with something like 4,000,000 cubic meters of silt every year. So what they wanted to do was move the mud from one section of the lake to another section of the lake, and that was supposed to enhance its water holding capacity, he said.

“Obviously, matter occupies volume and if it occupies the same space, the volume doesn’t decrease. That is going to cost us P18.7-billion. So, with all due respect, that’s what they wanted to do for flood mitigation and obviously, it’s a joke,” the President said.

“So we’ve had to come up with new plans. For instance, for Laguna Lake it might be a ring-road dike, and the beauty of it (is) it will also be self-financing via the PPP (private-public partnership) project.”

He wanted all these projects to be completed in two to three years.

Mr. Aquino called on the people to support government efforts in addressing flooding.

“Let us help each other … so that we can overcome this,” he said.

He explained that he visited the evacuees to personally assess their situation and to let them “know that this government is ready for this (problem). We have a lot of resources to help you. Expect that we will not let you down.”

In a text message, Budget Secretary Florencio Abad said the government had the funds for relief, evacuation and resettlement of flood victims.

“For these we are adequately funded. We have not started receiving reports yet on damage,” he said.

“The proper use of the calamity funds is actually a criteria in the ‘seal of good housekeeping’ awards given out by the DILG (Department of the Interior and Local Government),” Robredo told the Philippine Daily Inquirer.

As of Thursday, the interior secretary said the governors of Laguna, Bataan, Pampanga, Bulacan and Zambales had declared a state of calamity in the towns and cities in their respective provinces.

Other LGUs which made the same declaration were Olongapo City and the towns of Culion, El Nido and Linapacan in Palawan province.

The cities of Navotas, Malabon, Valenzuela, Marikina, Manila, Muntinlupa and Pasay in Metro Manila were also put in a state of calamity.

Under the law, municipalities, cities and provinces which made such declaration after a natural or man-made disaster may use their calamity funds to help the affected residents.

The fund comes from 5 percent of the total annual internal revenue allotment of each LGU.

The borrower will start monthly payments after three months instead of just one month. With a report from Marlon Ramos