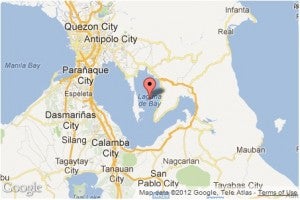 Even with Thursday’s fair weather, a swollen Laguna de Bay rose to within 15 centimeters of its 2009 water level when Tropical Storm “Ondoy” brought devastating floods to towns around the lake in Laguna.

In Pampanga and Bulacan provinces, residents and local officials have begun preparing for the anticipated rise of floodwaters and the swelling of rivers as water from Nueva Ecija and Tarlac provinces starts to drain toward Manila Bay. The two provinces catch water from the uplands of nearby provinces before it goes out to sea.

At least 13 more people in Bulacan, Pampanga, Bataan, Olongapo City and Pangasinan were reported to have drowned, bringing the death toll from this week’s floods in central and northern Luzon to 20.

Emil Hernandez, a hydrologist of the Laguna Lake Development Authority (LLDA), said the lake’s water level increased to 13.8 meters above sea level (masl) Thursday morning from 13.6 meters on Wednesday. This was close to breaching the 13.95-meter reading during Ondoy’s onslaught in September 2009.

The normal water level is at 12.5 meters from September to December, and at 10.5 meters during the dry season.

“The areas hit by the flood during Ondoy were the same ones experiencing the flood,” Hernandez said.

Around 217,420 people were affected by the flood in Laguna. This included the 11,972 families currently occupying 152 evacuation centers, according to Laguna Governor Jeorge “ER” Ejercito.

In a statement, LLDA General Manager Neric Acosta said the agency had allotted P300,000 as calamity fund for its relief operations in Laguna and neighboring Rizal province.

Fishing boats and improvised floaters have replaced tricycles on the flooded road to ferry residents in and out of Dela Paz.

Norma Parcon, a resident, decided to bring her children to her mother’s home in Pagbilao, Quezon province, when she heard that the flood in her neighborhood could last for months.

“They can’t stay here and not attend school. It would be a waste as my daughter here is doing great in her class,” she said.

Parcon and her husband crossed waist-deep waters, pulling an improvised raft carrying their children to dry land and board a tricycle that would take them to the bus station.

Cenon Almazora, the village chief, said only 10 to 20 percent of the community has remained dry. The rest, including the village hall and the health center, are submerged.

Even the two public school buildings used as evacuation centers were flooded. “We’ve already stopped accepting evacuees here because both schools were already full. The rest are being transferred to another village,” Almazora said.

An evacuee, Elizabeth Encialas, 48, said that “unlike … Ondoy that took us by surprise, the rains this time happened over several days which gave us time to save our things and evacuate.”

People were also “more alert” whenever the water on Laguna de Bay rises, she said.

Asked if she and her family considered permanently moving elsewhere, Encialas said “we have nowhere else to go. Besides, people here are already used to the floods.”

In Pampanga, floodwaters in eight eastern villages of Masantol town rose up to a meter high at past noon Thursday as the Pampanga River flowed down to the Manila Bay, former Vice Mayor Bajun Lacap said.

Two bodies were found floating in Barangay (village) Sta. Juliana in the City of San Fernando.

Renato Fran, an Aeta chieftain in Mabalacat City, drowned while trying to cross a hanging bridge over the Sacobia River in Barangay on Tuesday. His body was found in the Parua River in Concepcion, Tarlac, on Wednesday.

In Bataan, Danilo Masangkay, 14, who went missing on Tuesday night, was found dead in a river in Orion town Thursday, police said.

In Pangasinan, the bodies of two drowning victims were recovered from the swollen rivers of Balungao and San Jacinto towns on Tuesday and Wednesday. They were Reynaldo Padilla, 37, of Barangay Angayan Sur in Balungao, and an unidentified man from San Jacinto town.

The PDRRMC said Jason Perdido, 16, was swept away by strong currents when he tried to cross Sinocalan River in Manaoag on Wednesday.

In Olongapo City, the body of Anthony Ramos was found near the Yacht Club inside the Subic Bay Freeport on Thursday morning. Ramos was one of two residents swept away by floodwaters early this week.

In Pampanga, the towns of Sto. Tomas and Minalin and the southeastern side of San Fernando are bound to suffer the fate of the neighboring lahar-buried town of Bacolor if the Department of Public Works and Highways (DPWH) does not act fast to divert lahar and water that swamped and breached a 9.6-kilometer dike below the FVR Megadike.

San Fernando Mayor Oscar Rodriguez warned DPWH officials of such a scenario in a meeting as he appealed for immediate engineering interventions of the national government.

Some 10,000 households are in harm’s way while the North Luzon Expressway (NLEx) is also threatened, Rodriguez said.

Pampanga Governor Lilia Pineda endorsed the appeal of Rodriguez, saying that as counterpart to the national government’s aid, she could mobilize the 3,000 registered quarry trucks in the province to remove silt.

The dike was built in 1997 after the DPWH completed the FVR Megadike in 1996 to save those towns from lahar flow. It was designed to contain the sand and water flowing through the Gugu River inside the megadike.

Indiscriminate quarrying in the river has compromised the tail dike, engineers said. Filled by two weeks of constant rains that turned severe on Monday, the dike breached on Tuesday, flooding Sto. Tomas and Minalin by up to 1.21 meters.

In Olongapo City, officials warned residents to be alert for potential landslides in the villages of Barretto, Kalaklan, East Bajac Bajac and Sta. Rita.

In Bataan, five power transmission lines in Morong town were damaged by strong winds, cutting the power supply in the town and at Bataan Technology Park, reports from the National Grid Corp. of the Philippines showed.

The provincial board, in a special session Thursday, declared the province under a state of calamity.

As of 11 a.m., residents in five areas in the towns of Bugallon, Aguilar and Mangatarem were being moved to evacuation centers.