Aquino assures flood victims: You are not alone | Inquirer News

Aquino assures flood victims: You are not alone 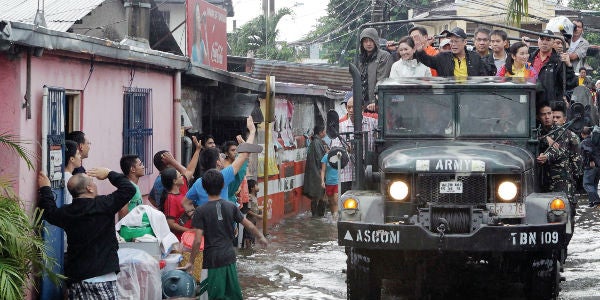 TRUE GRIT President Aquino is in Tunasan village, Muntinlupa City on the way to visit with evacuees at the elementary school. He refers to them as a “gritty people” and in a “lively mood” which he says makes his burden lighter. The President was also set to visit Quezon City, Marikina and Caloocan but driving rain and traffic gridlock on Edsa forced him to quit his schedule. Others seen on photo are Kris Aquino, Risa Hontiveros, DOTC Secretary Manuel Roxas, Tesda Director General Joel Villanueva and Customs chief Rufino Biazon

“You are not alone to fend for yourselves,” President Benigno Aquino on Wednesday assured the flood victims huddled at evacuation centers across Metropolitan Manila  and in nearby provinces.

Earlier in the day, Aquino took his celebrity sister Kris Aquino to Muntinlupa City to visit residents reeling from floods the past three days.

The President, Kris and government officials had to use an Army truck to negotiate flooded streets to get to Tunasan Elementary School where the evacuees sought shelter from rising floodwaters.

“I’m very happy to see them both,” Mary Manalastas, 60, said after receiving a bag of groceries from the President, referring to the Aquino siblings.

Mr. Aquino, who also brought some Cabinet secretaries with him appealed for patience, saying the flood may take some  time to subside.

“I’m very happy to see you in a lively mood despite the floods. It seems we’re a gritty people here. Seeing you like this lightens our burden,” he said.

But the President told the evacuees, “The flood problem won’t be solved until next week.”

He said there was a proposed project to ease flooding in Laguna Lake and Marikina River, and this was doable, but this may take years to complete. “After that, we’ll be able to avoid this kind of problem.”

The President was also set to visit devastated areas in Marikina, Quezon and Caloocan cities Wednesday afternoon. Driving rain and the traffic gridlock on Edsa, however, forced him to cut short the scheduled visits.

Mr. Aquino ordered an aerial survey of Metro Manila to determine the extent of the calamity that hit the National Capital Region and where exactly people needed help.

The President ordered the Philippine National Police to help motorists in distress and disaster-response agencies to give priority to rescue operations.

“You’ve tested this administration, and we performed,” he told reporters later, referring to the government’s response to the emergency.

The President said flood victims need not fret about food, as the government had enough to bring to all evacuation centers.

“You won’t be left alone to fend for yourselves,” Mr. Aquino said at the National Disaster Risk Reduction and Management Council (NDRRMC) at Camp Aguinaldo, trying to assure people huddled at evacuation centers that the government was looking after their needs.

At the NDRRMC, Mr. Aquino learned that the entire Malabon City could be accessed only by six-by-six trucks; that Obando, Bulacan, was in need of rubber boats; that some parts of the capital were still not passable to all types of vehicles; that apart from Metro Manila, parts of Bataan, Pampanga, Pangasinan and Zambales provinces were experiencing power outages, among other things.

A diluvian landscape as far as the eye could see greeted disaster officials who surveyed communities north of Manila from the air.

“The sea and floodwaters have merged. I couldn’t tell which was which,” Defense Undersecretary Benito Ramos said after flying over the Camanava (Caloocan, Malabon, Navotas and Valenzuela cities) area and towns in Bulacan province along Manila Bay Wednesday morning.

Ramos, executive director of the NDRRMC, said he and Defense Secretary Voltaire Gazmin took a helicopter and saw that at least “30 percent of Bulacan and Pampanga” were underwater.

“It was high tide and so the sea and the floodwaters inland merged. I couldn’t tell where one ended and the other began,” Ramos said in an interview.

As more rain fell, more than a million people in and around Manila battled deadly floods on Wednesday, with neck-deep waters trapping both slum dwellers and the wealthy on rooftops.

The death toll from this week’s rain in Manila and nearby provinces rose to 20 after four more people drowned, according to authorities.

This brought to 73 the confirmed number of people killed across the country since Typhoon “Gener” triggered heavy rains in late July.

The worst-hit parts of Manila this week were mostly the poorest districts, where millions of slum dwellers have built homes along riverbanks, the swampy surrounds of a huge lake, canals and other areas susceptible to flooding.

The NDRRMC said 126 roads were not passable to vehicles in Regions I, III, IV-A, VI, the Cordillera Administrative Region and Metro Manila.

Damage to crops wrought by the monsoon rains and Gener over the past weeks was estimated at P152.13 million. The Department of Agriculture said that as of August 7, the rice sector posted the biggest loss at P131.49 million.

The flooding is not likely to set back the country’s economic momentum, an economist at Bank of the Philippine Islands said.

BPI economist Emilio Neri Jr. said that while a thorough assessment of the situation had yet to be done, his group was expecting the disruption to have a negligible impact on the growth of the country’s gross domestic product in the third quarter.

Swelled by the incessant rains, Laguna de Bay also flooded communities along its shores, including Tunasan in Muntinlupa City.

From the flatbed of the Army truck, Mr. Aquino and  Kris waved at the residents, including some who rushed out of their homes and waded in floods, and snapped pictures of them. Seeing them together riding on a truck amid the floods brought cheer to the residents.

When they finally made it to the elementary school, shouts of “Kris, Kris, Kris!” filled the air.

Some 600 families were sheltering at the elementary school, according to Agnes Fry, a staff member of the local Department of Social Welfare and Development (DSWD).

She said the families needed toiletries and potable water, besides food and other basic necessities being provided by DSWD and the local government. With reports from Michael Lim Ubac, Ana G. Roa, Jerome Aning, Doris C. Dumlao and AFP