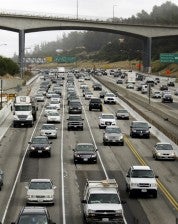 The Mulholland Drive bridge over Interstate 405, which crosses the Santa Monica Mountains connecting the San Fernando Valley and the Westside of Los Angeles. AP

LOS ANGELES—When the sun rises above Los Angeles on Saturday, residents in this car-dependent, traffic-choked city will see a rare sight: a 10-mile (16-kilometer) stretch of one of America’s busiest highways turned into a virtual ghost road.

Interstate 405, a highway normally so clogged that locals like to joke that its name is shorthand for “traffic that moves no faster than 4 or 5 miles an hour (6 or 8 kilometers per hour),” is closing for 53 hours for a major construction project.

As crews worked feverishly to get the freeway open in time for Monday morning’s rush-hour, residents have been making plans for weeks to stay off local roads, lest they trigger what officials dubbed “Carmageddon.”

Such an event could back up vehicles from the 405 to surface streets and other freeways, causing a domino effect that could paralyze much of the city.

With warnings having been broadcast through television, radio, social media and flashing freeway signs as far away as San Francisco, much of the city’s nearly 4 million residents appear ready to stay off the roads.

Traffic through the section of freeway that will close was lighter than usual during Friday evening’s rush-hour.

Mayor Antonio Villaraigosa said he thinks traffic will move smoothly if motorists take his advice to stay close to home throughout the weekend.

If people listen, there will be no shortage of activities awaiting them.

They can snag free popcorn at movie theaters along the 405 or drop in on Michael Jackson’s dermatologist for 25-percent-off Botox injections so that frazzled commuters won’t look quite so frazzled.

Those who do want that real road warrior look might consider swinging by T-Man’s Tattoos (located just off the 405) in the San Fernando Valley.

“If you come on in and mention you’re in town because you’re stuck from Carmageddon, you can get 15 percent off tattoos and piercings,” proprietor Howard Teman said.

Along with all the gimmicky promotions and attempts to cash in (“I Survived Carmageddon T-shirts are being sold all over the place), there have also been months of planning.

Construction crews have been gearing up, but so have police, fire and medical officials seeking to ensure that everything goes smoothly. Or, if it doesn’t, to ensure they are prepared to handle any emergency.

Heavy equipment needed to demolish a section of a 50-year-old bridge as part of a $1 billion freeway-widening project, was already in place Friday, hours before the 405’s midnight closure.

Sections of the bridge’s pilings that are being torn out had been marked and prepped in advance.

The city fire department put two dozen additional engines, fire companies and ambulances into service, placing them in neighborhoods that firefighters might have a hard time getting to from jammed roadways.

Much of the section of freeway that is being shut down winds through a hillside pass near Beverly Hills and other communities that are susceptible to brushfires.

Wildfire season, however, hasn’t reached its peak yet, Butler said. Besides, this weekend’s expected humid weather should further reduce the threat of a fire.

The center also stockpiled extra medical supplies and 5,200 boxed lunches for its staff.

For those who do stay home, Time Warner Cable promised to have technicians in the affected area ready to fix any TV-related problem.

The company was also activating a special “Beat the Traffic” channel with 24-hour reports from the Los Angeles Regional Transportation Management Center.

Some people were throwing Carmageddon parties at their homes, while others left for their destinations well before the freeway shut down.