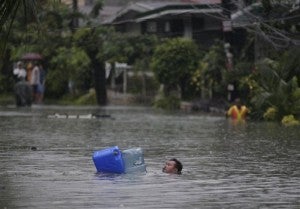 MANILA, Philippines – Torrential rains pounding the Philippine capital on Tuesday paralyzed traffic as waist-deep floods triggered evacuations of tens of thousands of residents and the government suspended work in offices and schools.

Malacanang immediately announced the suspension of classes and work in government offices in Metro Manila and nine provinces due to non-stop rains.

“Upon the recommendation of Pagasa and in view of the continuing inclement weather brought about by the southwest monsoon [Habagat], work in government offices and classes in college level in NCR [National Capital Region], provinces of Zambales, Bataan, Pampanga, Pangasinan, Tarlac, Bulacan, Laguna, Cavite and Rizal are hereby suspended today, 07August 2012,” the Palace said in its Memorandum Circular No. 33 signed by Executive Secretary Paquito N. Ochoa Jr.

The same directive, however, said that agencies “whose functions involve the delivery of basic and health services, preparedness/response to disasters and calamities, and/or the performance of vital public services shall continue with their operations and render the necessary services”.

Incessant downpours set off by the seasonal monsoon overflowed major dams and rivers in Manila and nine surrounding provinces and put authorities on alert. The death toll from last week’s Typhoon Saola, which battered Manila and the northern Philippines for several days, has climbed steadily to 51.

The head of the government’s rescue agency, Benito Ramos, said there were no immediate reports of new casualties early Tuesday after the rains pounded already saturated Manila for more than 24 hours.

Vehicles and even heavy trucks struggled to navigate water-clogged roads, where hundreds of thousands of commuters were stranded overnight. Many cars were stuck in the muddy waters.

The La Mesa dam, which supplies water to the capital of 12 million people, spilled excess water for a second time early Tuesday into the rivers flowing into Quezon city, a middle-class Manila suburb, as well as the neighborhoods of Malabon, Valenzuela and Caloocan, where several villages were submerged.

Along the swollen Marikina River, police were deployed to move more than 5,000 residents away from the riverbanks in what Vice Mayor Jose Cadiz said was an enforced evacuation. The operation started after the City Hall sounded the alarm bell.

The Philippine Stock Exchange in the financial district of Makati, which was also flooded, was closed Tuesday. Also closed was the U.S. Embassy along Manila Bay in the historic old city, which was drenched out last week when a storm surge pushed the water over the seawall.

“The embassy is closed today due to excessive flooding in the streets and concern for the safety of our employees and consular applicants,” Ambassador Harry Thomas Jr. said in an announcement.

The military, which is involved in rescue work, canceled several events due to the flooding, including an awarding of bounties to tipsters who helped troops capture al-Qaida-linked militants.

In 2009, massive flooding spawned by a typhoon devastated Manila and the surrounding areas and killed hundreds of residents in rampaging flash floods. The state weather bureau said the current flooding was not as severe but warned of more rainy days ahead.

Typhoon Saola was the seventh of 20 typhoons and storms expected to batter the Philippines this year.