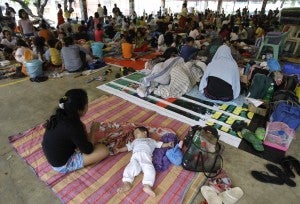 A Filipino baby sleeps at an evacuation center at Marikina, east of Manila, Philippines, on Monday, Aug. 6, 2012. Heavy rains forced some classes to be suspended as hundreds of residents living in low-lying areas evacuated their homes due to high floods and rising of dam levels. AP PHOTO/AARON FAVILA

MANILA, Philippines—Classes on Tuesday at all school levels in Manila, Makati, San Juan, Taguig, Muntinlupa, Pasig, Marikina, and Navotas cities and from pre-school to high school in Quezon, Mandaluyong, Caloocan, Malabon and Valenzuela cities are suspended.

The suspension of classes at all levels in San Juan on Tuesday was announced by San Juan Representative JV Ejercito via his Twitter account.
Ejercito said the suspension was announced as a result of the red alert status the Philippine Atmospheric Geophysical and Astronomical Services (Pagasa) had placed on the National Capital Region.

Classes from preschool to college in public and private schools in Taguig and Muntilupa on Tuesday have been called off by their respective local government units amid the unabated rains Metro Manila has been experiencing until Monday night.

In Muntinlupa, rescue teams of the city government are poised to evacuate families living in the coastal areas of the Laguna de Bay due to flashfloods, Omar Acosta, public information office chief, said.

He added that reports that the water levels of the Laguna Lake continued to rise prompted Mayor Aldrin San Pedro to authorize the use of schools in the city as temporary shelters for the evacuees.

Additionally, radio reports said that classes at all levels in Pasig and Marikina cities are suspended on Tuesday.

The cities of Caloocan, Malabon, Valenzuela and Mandaluyong have all suspended Tuesday classes from preschool to high school in both public and private schools.

Meanwhile, Navotas City has suspended classes in all levels, including college.

College students not studying in these universities have been asked to call their school administrators for advice on class suspensions.

The raising by the Pagasa of a red warning signal over the National Capital Region prompted the Quezon City government to suspend all classes from preschool to high school in all private and public schools in the locality.

The advisory from the city government left the suspension of classes in the tertiary level to the discretion of the Commission on Higher Education, based on its guidelines.

Classes at all levels are also suspended in UP Diliman according to UPD Chancellor Caesar Saloma.

Classes are suspended from elementary to high school level in public and private scholls, according to acting Mayor Lenlen Oreta.

Classes on Tuesday were also suspended in San Pablo City in Laguna and in Cavite City and the towns of Bacoor, Kawit, Noveleta, Rosario, Tanza, Naic, and Ternate, all in Cavite province.
Meanwhile, Pagasa has urged residents living near the Tullahan River, especially in Malabon, to evacuate, as the river could overflow.

Residents living near the Tullahan river in Quezon City had earlier been evacuated.

The Tullahan River, which snakes through Quezon City, Valenzuela City, Malabon City, and Navotas City before going out into the Manila Bay, is connected to the La Mesa Dam, which, as of 11 p.m., has reached its spilling point.—Jamie Marie Elona, INQUIRER.net; and Kristine Felisse Mangunay, Niña Calleja and Nathaniel R. Melican, Philippine Daily Inquirer