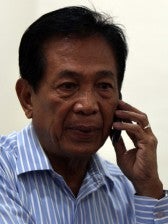 MANILA, Philippines—Former Commission on Elections (Comelec) chairman Benjamin Abalos Sr. has asked a Pasay court to overturn its decision to turn one of his coaccused in a poll sabotage case into a state witness.

The poll sabotage complaint was filed by a joint Comelec and Department of Justice (DoJ) panel.

Formerly coaccused Martirizar, through the DoJ, was able to turn state witness after Mupas found her testimony necessary to the case. She had testified that Abalos personally instructed her to ensure a “12-0” result for Arroyo’s senatorial-candidate allies in Team Unity.

In his motion for reconsideration, Abalos argued Martirizar should not have been discharged because she was one of the most guilty in the case.