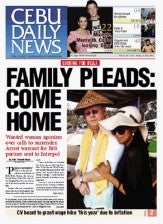 This was the plea of relatives and friends of Bella Ruby Santos, the former bar girl from Naga City who often bragged that there was no chance she’d be found guilty of murder.

Santos’ allies are worried because she may make good her threat to end her life out of despair.

Santos and her British boyfriend Ian Charles Griffiths are facing charges of kidnapping with homicide in court in relation to the Feb. 8 disappearance and death of Ellah Joy Pique, a pupil in Minglanilla town.

With no bail set by the judge, Santos faces the strong prospect of time in jail even if her lawyers file a motion to set bail, which would take time to hear and decide.

Santos’ relatives, who were interviewed at her home in Naga City, are tight-lipped about her whereabouts.

Her manicurist Rose Marie Tapic said Santos called her up last Wednesday from Hong Kong, where she was reportedly on vacation.

“Santos isn’t hiding. She will return home but I don’t know when,” Tapic said.

The Bureau of Immigration, however, declared that Santos hasn’t left the country based on their monitoring. A hold-departure order was issued by the judge.

Sanots’ elder sister, Ana Marion Lalican, said Santos is willing to face charges filed against her but has withdrawn for now to ponder her next move.

The pressure to find her stepped up after a private citizen offered a P100,000 reward for information on Santos’ whereabouts and police distributed posters with her photos labeling her “Wanted.”

Lalican and Santos’ friends were dismayed by the police search.

“There are many other criminals out there. Why do police give special attention to my sister. It’s unfair. I hope they do that to all wanted persons,” Lalican said in Cebuano.

She appealed to her sister to resurface.

“Wherever you are, please contact me. Show up, don’t delay,” said a teary-eyed Lalican.

Friends said they worried that Santos may harm herself. They said she once planned to jump from the second floor of their old house in barangay Inayagan, Naga City, at the height of the adverse publicity over the case and that Santos’ relatives had to guard her movements after that.

“We will advise her to surrender. She can’t escape from the case,” Santos’ lawyer Rameses Villagonzalo said. He said she was just somewhere in Cebu.

Once Santos surrenders and submits to the jurisdiction of the court, defense lawyers plan to file a petition to grant bail.

Bail is matter of constitutional right, but since the crime draws a penalty of capital punishment, the judge can decide not to allow bail if strong evidence of guilt is shown.

Hours after, defense lawyers filed a motion asking the court to determine whether there is probable cause for the issuance of an arrest warrant against the accused.

The judge said the pleading was “moot and academic” with her order to arrest the two but set a hearing for July 29.

Griffiths is in the United Kingdom, where he has a residence in London.

Griffiths was initially picked up by UK authorities for questioning when charges were filed in Cebu the other month but he was allowed to post bail after spending two nights in detention.

He was advised not to leave London pending verification of the status of the criminal case, and his movements were monitored by the authorities.

Cebu Provincial Prosecutor Pepita Jane Petralba said there is a possibility that UK authorities will honor the warrant of arrest issued by the Cebu City court against Griffiths even though there is no extradition treaty between the Philippines and the UK.

She cited the case of former Chilean president Augusto Pinochet who was the subject of a warrant of arrest issued by a Spanish court.

The UK deemed the arrest warrant from a foreign country valid.

When Pinochet went to the UK for medical reasons, he was arrested by authorities.

She said the Departments of Justice and Foreign Affairs, in behalf of the government, could request UK authorities to send Griffiths back to the Philippines for trial.

“It is highly unlikely for Griffiths to come back here so he will have to be arrested. A negotiation (between the Philippineds and UK) has to be made,” Petralba said.

“We have a vibrant relationship with UK so have hope (that the the request of have Griffiths back in the Philippines will be granted),” she said.

“We are happy. With the issuance of a hold-departure order against Santos, she could no longer leave the country. There is a big possibility that she will be arrested,” Saniel told reporters.

Saniel said they are also studying on how to bring Griffiths back to the country.

“Santos shouldn’t keep on hiding in her hole. I thought she was brave,” Renante said. With a report by correspondent Gabriel Bonjoc