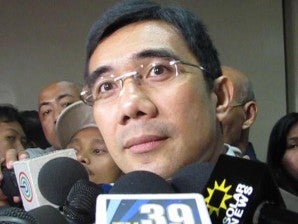 MANILA, Philippines—The House of Representatives will now participate in the selection process for the next chief justice, Representative Niel Tupas Jr. said Friday.

“With the Supreme Court decision allowing the two representatives of Congress to participate and vote in the JBC (Judicial and Bar Council) nomination process, there is no more reason to delay the selection and nomination of the new chief justice,” said the Iloilo representative in a text message.

“With this ruling, the House will now participate and vote in the JBC proceedings,” he said.

The Supreme Court on Friday allowed Congress to have two representatives to the Judicial and Bar Council only for the ongoing selection of the next chief justice.

The high tribunal, acting on a joint motion for reconsideration petition filed by the Senate and the House of Representatives, removed the “immediately executory” phrase from its July 17 ruling, which earlier ordered the JBC to allow only one representative of Congress.

Senate President Juan Ponce Enrile and Speaker Feliciano “Sonny” Belmonte responded to the earlier ruling by announcing that Congress was pulling out of the JBC selection process, arguing that neither Tupas nor Senator Francis Escudero could represent government’s legislative branch to the council. With a report from Karen Boncocan