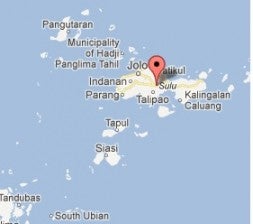 ZAMBOANGA CITY, Philippines—Thursday’s ambush in Sulu  in which three police officers and a civilian were killed  could have been politically motivated but the authorities said Friday  they were not blaming any particular person at this time.

Mohammad was to hold office for the first time after the Commission on Elections voided the proclamation of Ahmad Omar and declared her the real winner of the 2010 Omar mayoral election. She was being escorted to Omar town when her convoy was ambushed.

The car bearing Jailani and the other slain police officers were at the head of the  convoy, which came from Barangay Bus-bus in Jolo town, where the provincial police headquarters are located, Avenido said.

“(Mohammad) was about to hold office for the first time at the municipal hall and she requested for some escorts. Jailani may have assessed the danger at that time so he joined the team to lead the convoy,” Avenido said.

Avenido said Jailani and his men were able to fire back at the attackers and engaged them in a 15-minute  battle but they were overpowered.

Jailani, he said, expired while being treated at a hospital.

Soldiers later arrived but failed to catch up with the fleeing armed men. They brought the victims to the hospital, Avenido said.

“It is sad that our men died because the incident is with political color. We lost precious lives in the name of politics,” Avenido said.

But he quickly added that the police were not directly blaming Omar for the incident as an  investigation was still being conducted.

“I am not saying that the other politician is behind the ambush,” he said. However, Avenido noted that Mohammad and Omar were feuding.

Avenido said the police were trying to secure witnesses’ accounts, which could help unmask the people  behind the ambush.