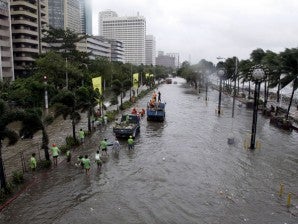 Typhoon “Gener” blew slowly out of the Philippines Wednesday, leaving 14 people dead, 4,600 others in evacuation centers, and P2.1 million in damage to infrastructure.

Moving at 7 kilometers per hour, Gener headed toward Taiwan and Japan’s Ryukyu Islands, inducing the southwest monsoon to dump rain over Luzon and the Western Visayas, the state weather bureau said.

A night of heavy rains on Tuesday caused flooding in cities on the rim of Manila Bay in the National Capital Region, leading to the declaration of a state of calamity in Navotas City Wednesday.

Powerful storm surges caused flooding in Manila’s bay area, forcing the Senate to shut down for a second time this week and the US Embassy to cancel work at its chancery and suspend consular services.

As of 4 p.m., the typhoon’s eye was spotted 380 km north-northeast of Basco, Batanes province, packing maximum sustained winds of 130 kph and gusts of 160 kph, according to the Philippine Atmospheric, Geophysical and Astronomical Services Administration (Pagasa).

The typhoon was moving north-northwest at 15 kph, twice as fast as its movement reported earlier in the day, Pagasa said.

As Gener lingered, Pagasa reported spotting in the morning a low pressure area 360 km west-northwest of Basco. By afternoon, however, the low pressure had dissipated, absorbed in the southwest monsoon flow, Pagasa said.

Pagasa placed the Philippines’ northernmost groups of islands—Batanes, Calayan and Babuyan—under Storm Signal No. 2 and raised Signal No. 1 over the rest of Cagayan and Apayao provinces.

Pagasa said Gener would continue to strengthen the southwest monsoon, which had been bringing rains and moderate to strong winds over Luzon, including Metro Manila, and Western Visayas, since late last week.

The typhoon would continue pouring heavy to torrential rain, or from 10 mm to 35 mm of rainfall per hour, on areas of the country under its 700-km cloud diameter, Pagasa said.

Pagasa said Gener was now expected to leave the Philippine area of responsibility this afternoon when its eye reached 580 km north-northwest of Basco, or 80 km northwest of Taipei in Taiwan.

Earlier Wednesday, Pagasa said the typhoon might leave Friday afternoon, but adjusted the forecast in the evening.

By Thursday morning, Gener would have moved out to 400 km north-northeast of Basco, Pagasa said.

The weather bureau reiterated its warning to residents of  low-lying and mountainous areas to the dangers of flash floods and landslides.

Likewise, those living in coastal areas under Storm Signal No. 2 were alerted against big waves or storm surges generated by the typhoon.

Executive Director Benito Ramos of the National Disaster Risk Reduction and Management Council (NDRRMC) said Wednesday that the death toll had reached 14, the latest ones reported in Maguindanao.

Four people drowned in Zamboanga del Norte province and two others died in a landslide in Benguet province, Ramos said.

In Laguna province, a man was killed when a coconut tree brought down by strong winds fell on him, while in Romblon province a woman died after being hit a falling tree branch.

Ramos said a man was electrocuted in Bacoor, Cavite; another man drowned in waters off Rosario, in the same province; and a man from Laguna died when a ferry ran aground in Romblon.

Ramos said government search teams were looking for four missing fishermen in Mindoro province, while 129 other people had been rescued.

“Five were reported injured, including two persons who were riding a motorcycle when a landslide struck  in the vicinity of Hingyon in Ifugao province,” Ramos said.

The NDRRMC said the typhoon left P2,130,230 in damage to infrastructure and crops, including  P1.1 million worth of corn and P893,320 worth of palay in Cagayan province.

The council said 4,619 people were in 32 evacuation centers in 25 provinces across the country. The typhoon totally damaged 379 houses and partially damaged 1,000 others.

The Department of Social Welfare and Development (DSWD) said it set aside P39.04 million for relief.

Classes were also suspended Wednesday in all levels in Obando, Bulacan, and nine schools in Valenzuela.

In a statement posted on its website, the US Embassy said work and services at its compound by the Manila Bay were suspended for the safety of personnel and people lined up outside for visa and other consular appointments.

Other US Embassy offices in drier parts of Roxas Boulevard, including the US Veterans Affairs Office, continued operations, Tina Malone, embassy spokesperson, said.

The consular services office will get in touch in the coming few days with those whose appointments Wednesday were canceled, Malone said.

Malone said the embassy operations were called off not because of the situation inside the offices but “mainly because of what’s going on outside the embassy.”

“There are people lined up outside and they are standing in floodwaters up to their knees, and we don’t want that,” Malone said.

In Navotas City, the Tullahan River topped its banks, worsening floods caused by surges from Manila Bay and forcing the declaration of a state of calamity.

The floods, up to waist-deep in some parts of the city, forced the evacuation of nearly 700 families from nine barangays in Navotas and another 400 in 12 barangays in neighboring Malabon City.

“The floods were caused by water spilling in from Manila Bay, similar to the storm surge that happened last year during Typhoon ‘Pedring,’” Tiangco said in a statement.

The flooding shut down schools in the city.

Storm surges damaged 100 houses and forced hundreds of families from their homes in four coastal towns in Cavite province.

“The waves were as high as 1.4 meters, thrice the normal height of waves [in those areas],” Remulla said.

The cities of Cavite and Bacoor and the towns of Ternate, Naic, Tanza, Kawit, Rosario and Noveleta remained under a state of calamity due to flooding.

In Rizal province, authorities were watching Marikina River, which had swelled to alarming levels. Authorities began to evacuate residents of San Mateo and Rodriguez towns whose homes were threatened by flooding.

In the villages of Burgos and Rosario in Rodriguez town, 309 families voluntarily left their homes at 9 a.m. as the river threatened to overflow its banks.

“The critical level [of Marikina River] is 21 meters, but as soon as it hits 20 meters we are implementing forced evacuation [for the remaining residents], said Vicente Tomazar, director of the Calabarzon (Cavite, Laguna, Batangas, Rizal, Quezon) Disaster Risk Reduction and Management Council.

Up north, Baguio City was battered by heavy rains for a second day Wednesday. Strong winds cut electricity in most parts of the city and nearby towns, forcing school shutdowns at all levels.

At least 30 people from six families were evacuated in La Trinidad, Benguet, due to the threat of landslides.

Strong winds toppled trees and electric posts and snapped power lines, cutting power in Baguio City and some villages in the towns of La Trinidad, Tublay, Itogon and Kibungan.

Most roads to Baguio were open Wednesday, including Kennon Road, which was closed for clearing on Tuesday.

In Benguet, the Shilan-Beckel Road and the Gakian section of the Acop-Kapangan-Kibungan-Bakun Road were shut due to landslides.

In Central Luzon, at least 147 villages in 12 towns in Pampanga were flooded caused by high tide and heavy rains.

In the Visayas, a woman died when a 50-year-old tamarind tree fell on an eatery in Iloilo City on Tuesday. Five other people were injured and taken to different hospitals.

Stormy weather forced the Coast Guard in Cebu to bar the departure of all ferries bound for different destinations in the Visayas Wednesday.

The Office of Civil Defense (OCD) in the Visayas reported that flooding affected 2,236 families, or 9,606 people, in the region as of Wednesday.