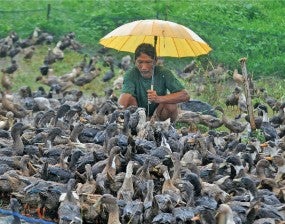 WET FLOCK Despite the downpour, a man clutching an umbrella feeds his ducks near Laguna de Bay in Taguig City. RICHARD A. REYES

A man drowned in Antique on Saturday, while more than a thousand people were evacuated in Negros Occidental and Maguindanao due to flooding.

Rough seas in Cebu province have forced boats to cancel their trips over the past two days.

In Metro Manila, authorities advised local government units on Sunday to evacuate residents near the Tullahan River because the water in La Mesa Dam was about to breach the spilling level. Excess water from the dam drains into the river that snakes through Quezon, Caloocan, Valenzuela and Navotas cities.

As of 4 p.m. Sunday, Gener was spotted 380 kilometers east of Aparri, Cagayan, with peak winds of 95 km per hour near the center and gustiness of up to 120 kph, said the Philippine Atmospheric Geophysical and Astronomical Services Administration (Pagasa). It was moving north-northwest at 15 kph.

Public storm signal warnings were hoisted over portions of northern Luzon as Gener, whose band of clouds has a diameter of 600 km, slightly intensified as it crept toward the country’s northern tip.

The Pagasa placed Cagayan, including Calayan and Babuyan groups of islands, and the Batanes Group of Islands under Storm Signal No. 2. It said sustained winds of 60 kph to 100 kph were expected in the province until today.

Any form of sea travel in the affected areas would be risky, the agency said as it reminded residents living in coastal areas to be on alert for big waves and storm surges.

Storm Signal No. 1 was hoisted over the provinces of Isabela, Kalinga and Apayao, as winds of 30 to 60 kph were expected to last until Tuesday.

The weather bureau advised against traveling on small seacraft and fishing boats.

Pagasa warned residents in low-lying and mountainous areas against flash floods and landslides as heavy to intense rainfall was expected.

Gener is expected to enhance the southwest monsoon, bring rains over southern Luzon, the Visayas and Mindanao.

At Terminal 3, nine Cebu Pacific flights to and from Caticlan, the gateway to the resort island of Boracay, were canceled, according to an advisory issued by the Manila International Airport Authority at 2:30 p.m.

In Isabela, the provincial government has set aside funds to provide fishermen, especially those in coastal towns facing the Pacific Ocean, with cash assistance from July 29 to July 31.

Governor Faustino Dy III said P250-P300 cash was allotted a day to each of about 500 fishermen in the towns of Maconacon, Divilacan, Palanan and Dinapigue.

“It is as if we were buying what they would have caught, so they would not go out to sea while the waters are rough and dangerous,” he said.

Josefina Timoteo, regional director of the Office of Civil Defense (OCD), said heavy rains in Bulacan on Saturday night caused flooding in at least seven villages in San Miguel town. On Sunday morning, however, the floodwaters, which reached up to 2 feet, started to recede, she said.

Timoteo said operators of the Bustos Dam in Bulacan began releasing minimal volumes of water due to heavy rains.

As of 1 p.m., Montales said residents were being evacuated.

“We don’t have reports of any casualty yet, but the rains damaged crops,” he said.

Local authorities ordered a preemptive evacuation of 60 families from Barangay (village) Burgos in Rodriguez, Rizal, early Sunday but they were allowed to return home at 1:30 p.m., according to the Regional Disaster Risk Reduction and Management Council.

In Antique, Ronald Necor, 33, drowned on Saturday after he was swept by strong currents in the Paliwan River in Bugasong town, according to the OCD in Western Visayas.

In Negros Occidental, a total of 238 families, or about 1,000 people, have been evacuated in Bago City and Hinoba-an town since Friday evening due to flooding.

In Cebu, rough seas forced some vessels to return to their ports of origin, while others canceled their trips on Saturday and Sunday, stranding passengers.

Trips of the Cebu-based Starcraft vessels of Sea Highway Carrier Inc., which ply the Cebu-Bohol route, were canceled Sunday.

Clemer Lines has suspended all trips to Getafe since Sunday morning.

An OceanJet 5 fast craft carrying 197 passengers and 13 crew from Tagbilaran City in Bohol ran aground as it approached the south entrance of Mactan Channel at past 8 p.m. on Saturday.

When a sister vessel, OceanJet 6, responded to rescue the passengers, it also ran aground on Shell Island, according to Punzalan. It went back to Pier 1 by itself while OceanJet 5 was towed by the tugboat Metro Tug 5 back to Pier 1.

In Maguindanao, 14 villages in at least three towns were submerged by floodwaters that swelled rivers draining into the Liguasan Marsh, the OCD in the Autonomous Region in Muslim Mindanao (ARMM) said Sunday.

“There are no reports yet of mass evacuation, but we are constantly monitoring the situation,” Rirao said.

Initial reports from the agriculture department showed that some 40 percent of Buayan corn and rice crops had been damaged.