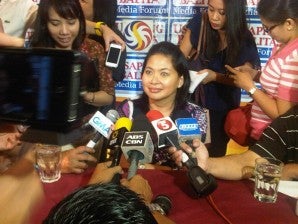 Arroyo has gone to an alternative medicine clinic in Tagaytay to seek treatments which could ease her discomfort that has not been resolved after three surgeries.

She said that Arroyo has lost more than 20 pounds and was having difficulties in eating. “Less than 90 pounds na lang siya. Hirap lang talaga siya kumain.”

Even so, she said that the lawmaker was “not desperate. She’s left with no choice at this point with the legal limitations. She’s not dying or gasping for air but she can choke anytime and her breathing can get affected.”

Arroyo is attended by a private nurse and will continue her physical therapy sessions at the Veterans Memorial Medical Center.

Despite the cases against Arroyo and her poor health, her spokesperson maintained that “she’s a very strong willed person, it’s (strong will) still there but she also gets strength from prayers. She goes to church everyday.”

Horn said that when the plunder case was filed, Arroyo said “maybe we aren’t praying enough, we should pray more.”

Asked if Arroyo prayed more after cases were filed against her, the spokesperson said that “she has more time to pray now. (But she has always been) very, very prayerful.”

She said that the Pampanga lawmaker wanted to visit the House of Representatives upon being freed on Wednesday but was urged to go straight home and get ample time of rest.

Horn said it was unclear when the Pampanga lawmaker will resume her work at the House of Representatives.

Arroyo is entertaining the idea of being treated through alternative medicine since she was limited by the hold departure order by Sandigan from seeking medical attention abroad, said Horn.