CENTENNIAL, Colorado — James Holmes spent a year in a small neuroscience doctoral program, surrounded by scientists and roughly three dozen classmates delving into the inner workings of the brain.

The University of Colorado, Denver, isn’t saying if they had any warning signs about the man accused in the deadly shooting rampage at an Aurora, Colorado, movie theater.

Experts say, however, the intimacy of the program and its focus on the brain may not have been enough for staff and students to detect that Holmes was on a course that police say ended with the deadly rampage at a midnight showing of the new Batman movie. 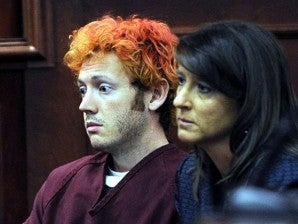 In this Monday, July 23, 2012 file photo, James Holmes, accused of killing 12 people in Friday’s shooting rampage in an Aurora, Colo., movie theater, appears in Arapahoe County District Court with defense attorney Tamara Brady in Centennial, Colo. With their anger and tears stirred by the sight of Holmes in a courtroom with red hair and glassy eyes, the families of those killed in the Colorado theater massacre now must go home to plan their final goodbyes. (AP Photo/Denver Post, RJ Sangosti, Pool, File)

Supported by a prestigious federal grant, Holmes, 24, was in the first year of a program at the Anschutz Medical Campus dedicated to neuroscience, studying such topics as how the brain works or malfunctions or helping develop drugs to treat epilepsy and other disorders.

But it is not behavioral science or psychology, experts say.

David Eagleman, who runs the Initiative on Neuroscience and the Law at Baylor University, said some neuroscientists are experts in mental illnesses and aberrant behavior, but others spend most of their time studying molecular chemistry.

“It’s really only a fraction of professors” who could identify a simmering mental disorder, Eagleman said. “Many people in neuroscience are not specialized in the issue of picking up mental illness … There are plenty of people who just study mice and cats and stuff like that.”

Holmes is accused of methodically stockpiling weapons and explosives at work and at home that police say he used to kill 12 people and injure 58 more at a movie theater Friday in nearby Aurora. Police say he also booby-trapped his apartment with the intent to kill police officers.

Holmes’ arraignment hearing is on Monday.

Attention continued to focus on victims of the attack and their grieving families, many of whom turned on Tuesday to the grim task of preparing for funerals. Batman star Christian Bale visited survivors of the shooting and stopped by a makeshift memorial to victims near the movie theater where they were shot.

Authorities say Holmes began shopping for firearms while studying neuroscience. He joined the program in June 2011 after receiving a National Institutes of Health grant to cover his tuition and provide a $26,000 annual living allowance.

The school refuses to say what specifically Holmes studied. But an online syllabus listed him as making a presentation in May during a class called “Biological Basis of Psychiatric and Neurological Disorders.”

In early June, Holmes took a standard oral exam that ends a graduate student’s first year. The school will not say whether he passed, but Holmes filed paperwork to withdraw from the program just days later. He never provided a written explanation for his departure.

“He had, as is now common knowledge, excellent academic credentials,” said Barry Shur, dean of the university’s graduate program.

Shur said the graduate program is “like a family” in which faculty carefully monitor students’ progress.

“It would be a logical step to assume there were people in that program who worked closely with him and would have the expertise to assess his behavior,” said Mary Ellen O’Toole, a former FBI profiler and the author of the book “Dangerous Instincts: How Gut Feelings Betray Us.”

“But being able to recognize concerning, troubling behavior does not mean you can prevent a mass homicide,” O’Toole said. “There are many people at a university level who act quirky and strange and don’t go out and commit mass murder.”

Academics studying the human brain may not have the same ability to size up threats as someone who makes his living spending time with people firing guns, O’Toole said.

Glenn Rotkovich, owner of a private Colorado gun range outside Denver, quickly concluded there was something wrong with Holmes.

Holmes applied to join the range in late June. But Rotkovich said that after calling Holmes back and hearing a “bizarre” voice mail message — spoken in a strange, low-pitched voice with heavy breathing — he concluded he didn’t want Holmes as a member.

“I flagged him to people and said, if he shows up, I don’t trust him,” Rotkovich said.

The university’s silence on the year Holmes spent there contributed to the mystery surrounding his motivations. Administrators refuse to say whether faculty or students saw signs of dangerous behavior in Holmes. Campus police said they had no information on Holmes before the attack.

Holmes remained in solitary confinement Tuesday in Arapahoe County jail, a day after appearing bleary-eyed and disoriented in his initial court appearance. He could face the death penalty if convicted.

Working to build their case, a team of lawyers from the district attorney’s office spent about 90 minutes inside the movie multiplex where the shooting occurred. Crews were starting to encircle the building with a chain link fence while people continued to flock to a memorial nearby for the victims.

Relatives of those who died were bracing for a string of funeral services, the first of which — for Gordon Cowden, the oldest of those killed — was planned for Wednesday. Meanwhile, a woman whose husband remains in a coma after being shot in the head gave birth to a healthy baby boy in the same hospital Tuesday.

A profile for a man whose name and appearance matched Holmes has been removed from a dating website. Match.com spokesman Matthew Traub on Tuesday confirmed reports on TMZ.com and elsewhere that the profile was posted before the movie theater massacre. Traub would not comment on whether Match.com believes Holmes actually posted the profile.

The profile included the question, “Will you visit me in prison?” and said, “I spend a lot of time thinking about the future, mind (equals) blown.”

The profile photo showed a man whose hair is reddish orange, similar to Holmes’ hair when he appeared in court Monday.

New details emerged about the night of the shooting.

Clad in head-to-toe combat gear, Holmes allegedly burst into a midnight screening of “The Dark Knight Rises,” tossed gas canisters into the crowd and opened fire. Friends Stephanie Davies and Allie Young, who attended, said the gunman moved around the room yelling and seemingly targeting people.

“He would shout, ‘What are you doing? I said stand up!’ And he would pick people up. I saw him stand over someone. I just see hair and him holding the shirt and ‘boom,'” said Davies, 21.

Outside Colorado, men accused of making threats during or after other screenings of the Batman film have been arrested in separate incidents in Maine, Arizona and Southern California, underscoring moviegoers’ anxieties about security.

In Colorado, the shooting has prompted a sudden surge in gun sales.

In Arizona, Jeff Serdy, owner of A.J.I. Sporting Goods in Apache Junction, estimated he saw up to 40 percent more traffic than usual in the two days after the killings.

“I looked out on the floor and said to myself, ‘Whoa, look at all these people,'” Serdy said, noting many customers expressed concern that lawmakers may use the shooting to try to pass gun restrictions. Political analysts say there is little appetite in Congress for such laws.