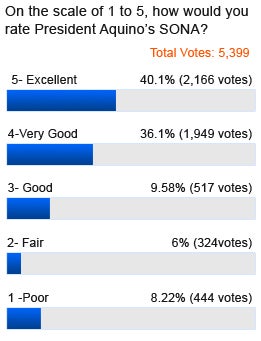 MANILA, Philippines—The greatest number of those polled by INQUIRER.net gave President Aquino’s State of the Nation Address the highest accolade. On a scale of 1 to 5, wherein 5 was “excellent,” 2,166 readers, or 40.1 percent of the 5,401 total number of respondents, said the President’s third SONA, delivered last Monday, was “excellent.”

Coming in close second were those who thought that Aquino’s speech was “very good,” or a rating of 4. They numbered 1,949, or 36.09 percent of those polled.

Five-hundred seventeen voted “good,” (or a rating of 3). They constituted 9.57 percent of the total voters.

Those who rated the President’s SONA as “poor” (or 1) numbered 445, representing 8.24 percent of the respondents.

The lowest number of respondents, 324, or 6 percent of the total, thought of the SONA as only “fair,” giving it a rating of 2.

The SONA was generally well received by members of both Houses of Congress and by businessmen, but slammed by militants. Even Vice President Jejomar Binay, who doesn’t belong to the administration party, praised the SONA, rating it a high 9 on a scale of 1 to 10.

Businessmen lauded the SONA, citing its positive message to investors.

Militants, however, said Aquino’s glowing depictions of his economic achievements were not being felt “on the ground.”—Rick Alberto