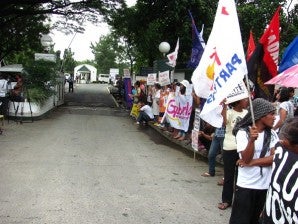 MANILA, Philippines – Former President Gloria Macapagal-Arroyo has left the Veterans Memorial Medical Center, where she has been detained since December, and is now at her home in a posh subdivision in Quezon City.

At around 2:35 p.m. Wednesday, the convoy bearing Arroyo left the hospital, her spokesman Raul Lambino said.

Arroyo was freed after the Pasay City regional trial court handling her case ruled that there wasn’t enough evidence against the electoral sabotage charges that were filed against her and two others in the 2007 senatorial elections.

“The court believes that the prosecution failed to establish with the required quantum of proof, that conspiracy exists on the part of accused Arroyo,” said the court’s bail order, which was released to the media.

“Accordingly, accused Gloria Macapagal-Arroyo is allowed to post bail for her provisional liberty in the amount of one million pesos.”

However the court said she could not leave the country.

Arroyo, 65, was arrested shortly after immigration authorities blocked her at Manila airport while trying to leave the country in November.

Her successor, Benigno Aquino III, had vowed to have her brought to justice for many acts of corruption he alleged she committed during her nine years in office that ended in 2010.

Arroyo has also been charged with corruption for approving an allegedly graft-tainted contract to set up a national government broadband system as well as siphoning off $8 million in state lottery funds.

One of Arroyo’s lawyers, Ferdinand Topacio, told Agence France-Presse that courts where these other two cases were being heard had not issued any order that she be detained.

Arroyo’s camp said her first few days as a free woman would still be occupied with getting treatment for her illnesses, according to one of her spokespersons.

The 65-year-old Arroyo is scheduled to visit an alternative medicine facility in Tagaytay City Thursday, according to Raul Lambino, her spokesperson on legal matters. Lambino was with Arroyo when she received the order for her release.

She will undergo therapy four times a week, he added.

Arroyo visited the chapel inside VMMC before she left the hospital, he said.

Lambino said Arroyo’s last few moments at the hospital was emotional for her relatives, visitors, and the staff who had attended to her all those months.

“The mood was happy. There were tears of joy,” he said over the phone.

“We are vindicated. We hope this would be a lesson for everyone,” Lambino said.

He said the visitors and the nurses were among those who had wept.