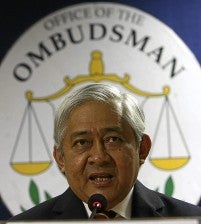 MANILA, Philippines—Solicitor-General Francis Jardeleza on Tuesday assured the Judicial and Bar Council (JBC) that he would inhibit from cases involving San Miguel Corp. if ever he becomes the Chief Justice.

Jardeleza served as general counsel for SMC from January 1996 to June 30, 2010, prior to his appointment as deputy Ombudsman for Luzon.

San Miguel Corp. has cases pending with the high court in relation to its ties to the late President Ferdinand Marcos.

“If ever I will be blessed with the Chief Justice position, I will inhibit in all San Miguel cases,” Jardeleza told JBC members.

Jardeleza also said he would not be afraid to make decisions contrary to the stand of the Executive Department “as long as the decisions are based on reason and well elaborated.”