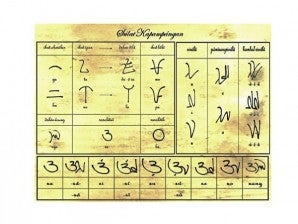 A GUIDE to writing the ‘kulitan,’ the indigenous way of writing by the Kapampangan, as taught in the book of Michael Raymon Pangilinan.

More Kapampangan can now write the way their ancestors did long before Spain colonized the Philippines in the 16th century.

There is no reason they cannot. Everything that is available about “kulitan”—the indigenous writing system of people who lived on the banks of a river that crisscrossed a vast territory in Luzon’s plains—is now in a book.

Michael Raymon Pangilinan’s “Introduction to Kulitan” is regarded as the first book on the topic.

Pangilinan, also known as “Siuala ding Meangubie” (Voice of the Departed), puts in volumes of information on kulitan or Sulat Kapampangan in this book.

He talks about its possible origins, how it survived the Spanish, American and Japanese times, and what Augustinian friars, Mount Arayat mystics, Katipuneros, antiJapanese guerrillas, their heirs and nationalists did to record the ancient script, keep it alive or revive it.

He delves, too, on the things that Kapampangan and non-Kapampangan do to popularize it: Encoding the script in digital format, tattooing, discussing and sharing research on the Internet, holding workshops, writing each other in kulitan, breaking the taboo that it should not be taught to foreigners and introducing innovations to the script.

Pampanga Auxiliary Bishop Pablo Virgilio David, for example, had the word “Alaya,” which is “east” in Kapampangan, woven in kulitan on his coat of arms.

“With its copious illustrations, the book marshals the widest range so far seen of images of the script’s characters: These include not only reproductions by early Spanish observers but also more recently uncovered 17th-century archival signatures written by Kapampangan [authors],” Canadian linguist Christopher Miller writes in a review.

“Although kulitan is no longer our writing system today, it is still our obligation to keep it alive, not just for heritage conservation’s sake, but also to keep our direct line to our distant
ancestors unbroken,” he says.

The book, he says, could have settled a dispute in local orthography.

“We who are quarreling today over which one is the original, genuine Kapampangan (with a “k” or with a “c”), well, the answer is, none of the above. The original is kulitan,” he says.

He says the Spaniards replaced it with the Western writing system using “c.” After the Spaniards left, Kapampangan nationalists Aurelio Tolentino and Zoilo Hilario replaced “c” with “k.”