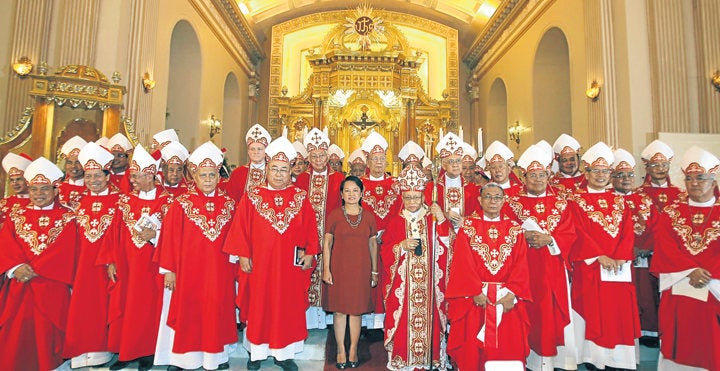 THE POWER AND THE GLORY Then President Gloria Macapagal-Arroyo joins Cebu Archbishop Ricardo Cardinal Vidal and 38 Catholic bishops in celebrating the 75th anniversary of the Cebu archdiocese. Some 600 priests and 38 bishops concelebrated the Mass at Cebu Metropolitan Cathedral on April 28, 2009. MALACAÑANG FILE PHOTO

What about you, madam?

Reeling from scandal, several Catholic bishops on Tuesday said it was time for former President Gloria Macapagal-Arroyo to divulge what she knew about the alleged misuse of Philippine Charity Sweepstakes Office (PCSO) funds.

“To hear the side of GMA [Arroyo] will help us to have the truth,” said Iñiguez, chair of the public affairs committee of the Catholic Bishops’ Conference of the Philippines (CBCP).

Iñiguez and the two other bishops made the call as the seven prelates, who acquired vehicles during the Arroyo administration using P8.258 million from the PCSO, began turning over the vehicles to the charity agency.

Led by Pueblos, the prelates are set to simultaneously turn over the vehicles either to the Senate or to the nearest PCSO office in the province, in time for the resumption of the Senate investigation of the controversy at 9:30 a.m. today (Wednesday).

Amid the controversy, the Church hierarchy apologized on Monday to the faithful for its involvement in the PCSO fund mess, saying that the bishops accepted the donations out of their sincere desire to help their people. But in the process, it said “they failed to consider the pitfalls to which these grants could possibly lead them.”

In a pastoral letter, the CBCP said the seven bishops were ready to accept responsibility for their actions and face the consequences if the donations were proven anomalous and unconstitutional.

The bishops may lose the vehicles but may get new ones.

Atienza, a leader of the country’s Catholic prolife movement, said the lay groups planned to seek donations from ordinary Catholics to raise P8.258 million that the bishops had received from the PCSO.

He said the money could either be returned to the PCSO or given to the bishops for them to buy new vehicles if the cars they had bought with money from the PCSO were surrendered to the government.

Pueblos, the prelate who asked for a vehicle from Arroyo on his 66th birthday in March 2009, said asking Arroyo to give her side was a “good suggestion.”

But Iñiguez and Bacani said they doubted that Arroyo would shed light on the matter. “I think she will not speak. Just look at the other cases. Her silence is her self-defense,” Iñiguez said.

The bishops implicated in the scandal (except for Salgado who is abroad) are set to appear before the Senate blue ribbon committee on Wednesday.

Church sources said at least nine other bishops were expected to join them at the Senate to lend moral support.

Retired Lingayen-Dagupan Archbishop Oscar Cruz said the scandal was the “worst wound” inflicted on the Church since the time he became a bishop in March 1976. He does not see any closure anytime soon.

Cruz added that the controversy was worse than other scandals that involved individual bishops before.

“There’s nothing bigger because it has caught the national attention for almost two weeks now. If I know right, big news can go as far as eight days usually,” he said.

“For example, (the death of) Mother Teresa was big news for only five days. The (death of Pope) John Paul II was big news for two weeks. This one is now almost two weeks and there’s still more. There still a (Senate) hearing (today),” he said.

Jaucian said the Mitsubishi Strada pickup that was donated to his diocese on Jan. 23, 2009, was already parked at the Pope Pius XII Catholic Center in Manila. So was the second-hand Nissan Pathfinder pickup purchased for P280,000 by the Apostolic Vicariate of Bontoc-Lagawe.

“They are ready to be returned,” Jaucian told the Inquirer in an interview.

His diocese purchased the pickup for P1.107 million using money from the PCSO. Jaucian said the vehicle was used to ferry personnel and deliver services to the poor in the rugged terrain of Abra.

Jaucian said the five other vehicles bought using PCSO cash donations to five dioceses would be returned to the PCSO offices where they are located.

He said the Prelature of Isabela in Basilan province was making arrangements to transport its donated Strada pickup by ship.

Among the vehicles to be returned on Wednesday are the Mitsubishi Montero bought by Pueblos’ diocese using PCSO donation.

The Archdiocese of Cotobato will return a Toyota Grandia Hi-Ace van, which was used to distribute “medicines and other relief goods to disaster-hit areas” and for “community health programs.”

The Archdiocese of Zamboanga will now make do without its Grandia van, which was bought in 2009 for “medical-related services.”

Caritas Nueva Segovia will also let go of its Isuzu Crosswind, which was used for “health, dental and medical outreach programs.”

Atienza said his group would coordinate with all Catholic organizations—churches, parishes and schools—that want to help raise funds for the bishops.

Atienza, lawyer Romulo Macalintal and the other lay leaders present at the launching of the fund drive at the Ilustrado Restaurant in Intramuros, Manila, gave their own donations. They were able to raise a total of P116,250 less than an hour after they began. A businessman donated P100,000 on the spot.

Atienza said the Coalition for Family and Life, which includes Couples for Christ, prolife groups, and parishes, would jump-start the signature and fund drive.

“We will be able to raise this P8 million quickly. This is voluntary… It is a small act compared to the big problem because it is a nationwide, even international scandal, which is hitting our beloved Mother Church,” Atienza said.

“The issue here is that they’re looking for the money so let’s give back the money to put an end to this,” he added.

Atienza said his group would approach ordinary Catholics and not celebrities like boxing champion Manny Pacquiao to emphasize that the campaign was from the grassroots.

Finding a way to help

In Roxas City, President Aquino said his administration would find a way to help religious groups reach out to the poor without violating the Constitution.

“I’m sure that there is a method by which funds can be made available to those who are really helping their communities,” Mr. Aquino said when asked how the government would reform the system of using PCSO funds after the CBCP apologized for getting donations from the charity agency.

He underscored the need to come up with this mechanism as the Constitution was very clear that “government funds cannot be used for the promotion of a specific religion.”

The President said Malacañang also was looking into the case of a religious order which he did not identify but whose complex was constructed with the use of government funds.

In Pasay City, PCSO Chair Margarita Juico said the agency would continue working with Catholic clergy in aiding the poor and the sick.

“The PCSO values its partnership with the Church. The charity institution shares the concerns of the Church in extending medical and health services to the poor and in helping make their lives a little better,” Juico said in a short speech before some 200 PCSO employees at the start of a “unity Mass” at the agency’s office in Pasay City.

Juico said she was “humbled” by the statement the other day of the CBCP expressing its apology to the Catholic community and the public over the solicitation and acceptance by some prelates of donations from the PCSO.

“It takes great courage, humility and grace from the CBCP hierarchy to come up with a statement that acknowledges some mistakes and error in judgment had been made by a few members of the clergy,” she said.

Juico said she and the PCSO board believed that the “time has come for the healing of wounds, for reconciliation and for moving forward.” With reports from Christine O. Avendaño and Jerome Aning