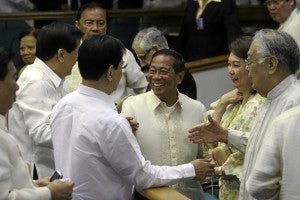 Vice President Jejomar Binay share light moments during the opening of the 3rd regular session of the 15th Congress at the Senate of the Philippines on Monday before the State of the Nation Address of President Aquino. Binay gave Aquino’s speech a rating of 8.5 to 9. INQUIRER PHOTO / NIÑO JESUS ORBETA

MANILA, Philippines—On a scale of 1 to 10 with 10 being the highest, Vice President Jejomar Binay on Monday gave President Benigno Aquino an 8.5 to 9 rating for his State of the Nation Address (Sona).

Binay said that he believed that Aquino fulfilled most of his promises since he stepped into office, saying “ang dami noon almost half-way na ‘yon eh sa Congress.”

Binay said he would continue to support Aquino. He also said that Aquino needed the support and trust of the Filipino people.