MANILA, Philippines—Militant groups describe the administration of President Benigno Aquino III on Monday morning along Commonwealth Avenue as “maka-dayuhang rehimen (regime catering to foreign interests),” a few hours before he delivers his third State of the Nation Address.

Despite the rains, protesters earlier from various militant groups led by Bayan-Southern Tagalog staged their protest, estimated by police at 500, past 10 a.m. near Ever Gotesco Mall on Commonwealth Avenue, which is about three kilometers from Congress at the Batasang Pambansa Complex.

The protesters burned effigies of Aquino and Uncle Sam as highlight of their early program. 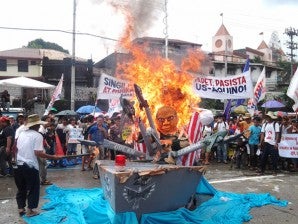 Like what they’ve been doing in the past Sonas, effigies of President Aquino and Uncle Sam are burned early Monday by militant groups. Photo by Frances Mangosing, INQUIRER.net

He claimed that people in Southern Tagalog “have realized President Aquino’s indifference to their plight in addressing socio-economic issues such us genuine land reform, descent wages, quality and affordable education.”

On Sunday, Bayan-Southern Tagalog led protesters starting from San Pedro, Laguna, to the US Embassy, Mendiola and Batasan to air their sentiments against the administration.

The protesters arrived shortly before 7 a.m., where it held a regional program narrating the real state of the Southern Tagalog region in the two years under Aquino.

Superintendent Marcelino Pedroso, head of Task Group Ever estimated that protesters would swell to 5,000 by Monday afternoon.