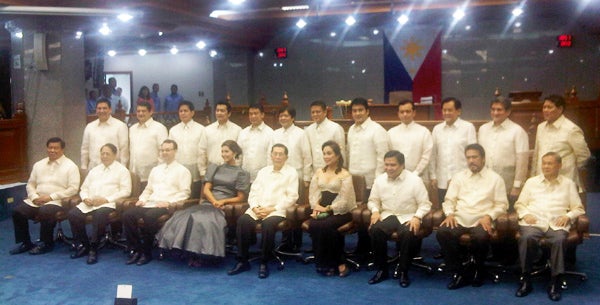 MANILA, Philippines—Session at the Senate of the Philippines resumed at exactly 10 a.m. Monday with 21 senators present.

In a letter addressed to Senate Secretary Atty. Emma Lirio Reyes, Santiago excused herself from the opening ceremony due to sickness.

“Kindly mark her in the Senate Journal as ‘On Sick Leave’,” Santiago’s chief of staff Atty. Camille Sevilla said in the letter. Senate President Juan Ponce Enrile and Senate Majority Floor Leader Vicente Sotto III were also given copies of the letter.

The session adjourned 45 minutes later after Senator Ponce-Enrile delivered his speech. It will convene again at 4 p.m. on Monday at the House of Representatives to give way to President Aquino’s third Sona.