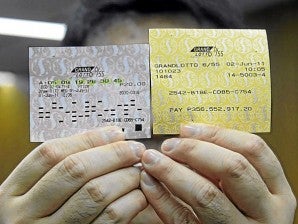 MANILA, Philippines—This woman from Sorsogon had every reason to lie low.

Of the three tickets she purchased for the GrandLotto 6/55 draw on July 4, one won the P163 million jackpot and another won the P150,000 consolation prize.

The 40-year-old single mother showed up at the Philippine Charity Sweepstakes Office on Friday morning to collect her prizes for picking the winning combination of 10-26-32-36-37-49, which was drawn early this month, and the consolation price for picking five of the six numbers on a separate ticket.

In a text message to the Inquirer, PCSO general manager Jose Ferdinand Rojas II said he spoke to the woman as he handed her two checks for the jackpot and the consolation prize.

“I just wanted the hype to die down,” Rojas said, quoting the woman as saying , when he asked what took her so long to claim her prize. “I want to be very careful, because you never know.”

The woman, who hailed from Sorsogon, said she had been betting in the lottery for two years and she picked the winning combination at random. She did not explain, however, why she selected five of the winning numbers twice.

She ticked off three sets of combinations, paying a total of P60 for the three tickets.

“With the money, I’ll be able to expand my business,” the woman told Rojas.

She also intended to make a donation to a church in her province, and share a portion of her winnings with her family.

She planned to save another portion for her two children’s schooling and their future.

Eleven other people, not counting the Sorsogon woman, came close to hitting the grand prize, according to Rojas.

Each of the bettors who picked five of the six winning numbers would each get the P150,000 consolation prize, just like the grand winner.