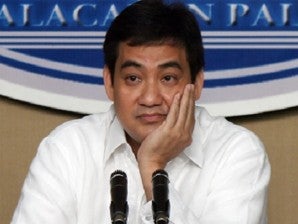 “Edwin Lacierda is uninformed at best, dishonest at worst. While it is true that conviction of cases lies with the courts, it is also true that only a small number of human-rights abuse cases are filed in court. Most of these cases do not make it to trial to begin with,” said Carlos Conde, researcher at the Asian Division of HRW, in an email to reporters.

Conde was referring to Presidential Spokesperson Edwin Lacierda’s reactions to the HRW’s reported “slamming” of the Aquino administration for not doing enough to curb human rights abuses.

Conde said it was ludicrous for Lacierda to say that “conviction of cases of rights abuses is out of the Executive department’s hands and that, besides, the number of ‘index crimes’ in the Philippines have gone down in the first quarter.”

Conde enumerated various reasons why most of the human rights cases were not filed in court, saying that investigations were stalled, witnesses were either afraid to come out or were themselves the target of violence, law enforcers were either too inept or too compromised to pursue thorough investigations, and, suspects like retired Major General Jovito Palparan — were not arrested despite the issuance of warrants of arrest.

“The military has, in several cases,  sought to obstruct investigations. We remind Lacierda that all these fall within the responsibility of the executive branch,” Conde said.

Conde also reminded Communications Secretary Ricky Carandang that many of the cases of abuses involved officers from the military, and that even the investigations from the United Nations and the United States revealed that these were true.

“The US government has been withholding millions of dollars of foreign military financing from the Philippines precisely because of these abuses by military and paramilitary personnel. Instead of mouthing baseless retorts to discredit reports of military involvement in these abuses, the Aquino government should start punishing officers and men in the army who violate human rights,” Conde said.

The National Union of People’s Lawyers (NUPL), counsel for the families of missing activists Karen Empeño and Sherlyn Cadapan, said the presidential spokespersons “glued to ivory towers should come down from the hill and see the reality from the ground.”

“It is simply the lamest of excuses, as it disregards the efforts of victims and their families to file cases against rights violators, no thanks to Aquino. It simply manifests this administration’s low regard for the pursuit of justice for the victims and in putting an end to killings and impunity. With this frame of mind, it is no wonder why Maj. Gen. Jovito Palparan Jr. remains free from arrest up to this time,” Karapatan spokesperson Cristina Palabay said.

Palparan has evaded arrest over the disappearance and illegal detention of Cadapan and Empeño.

Bagong Alyansang Makabayan secretary general Renato Reyes reminded the government that the victims were the ones who filed rights abuses cases, not the government.

“Fact is, the government has not shown much interest in human rights as seen from Aquino’s previous SONA speeches where the issue hardly merited any mention. When they do mention it now, palusot pa (they have to make excuses),” Reyes said.

The Philippine Army asked its critics, on Thursday, why they have not been talking about communist New People’s Army atrocities, its executions of militiamen and the use of land mines and child soldiers.

“Records will show that the number of reported human rights violations have dwindled over the years. We have also acted on the complaints about human rights abuses and sacked soldiers who committed abuses like the ones responsible in the alleged torture in Basilan,” said Major Harold Cabunoc, the Army spokesperson.

Cabunoc said the NPA had issued “press statements declaring our soldiers as criminals, and imposing death penalty through executions.”

He cited the case of Gino Olugar, a militiaman who was executed by NPA rebels in Camarines Sur, joining “the long list of militiamen” who had been killed by the group.

“Shall we forget the murder of Swiss and long-time North Cotabato resident named Patrick Winneger? He was executed by the NPA for suspicions that he is a military supporter. We don’t need to resort to blind finger-pointing because the NPA owned up the crime,” he said.

The Armed Forces of the Philippines said HRW should support its claims with evidence. In a briefing, the AFP public affairs chief, Colonel Arnulfo Marcelo Burgos Jr., said the military has always been open to investigation of its personnel over alleged human rights violations and extrajudicial killings.

“It has never been the policy of the AFP to use force beyond legal means,” Burgos said.