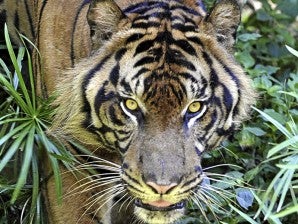 JAKARTA — Indonesian police seized 14 preserved bodies of critically-endangered Sumatran tigers in a raid on a house near Jakarta, a spokesman said Thursday.

A man identified as F.R. was arrested Tuesday in a suburban area of Depok suspected of his involvement in the illegal wildlife trade, national police spokesman Boy Rafli Amar told Agence France-Presse.

“We confiscated whole preserved bodies of 14 tigers, a lion, three leopards, a clouded leopard, three bears and a tapir and a tiger head,” he said, adding that investigations were ongoing.

“We believe he is connected to a network of rare animal traders. But we have not established yet if the animals are for the domestic or international market,” he said.

The suspect could face up to five years’ jail and fines of 100 million rupiah ($11,000) for violating natural resources conservation laws.

There are fewer than 400 Sumatran tigers left in the wild. Several die each year as a result of traps, poaching or other human actions.