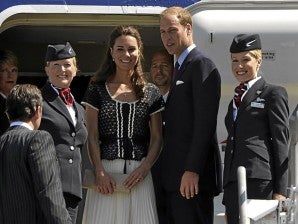 Prince William and Kate, the Duke and Duchess of Cambridge, prepare for their departure at the Los Angeles International Airport on Sunday, July 10, 2011. They headed back to the U.K. following a nonstop weekend that included a few chukkas of polo, time with Hollywood’s own version of royalty and several events that raised millions for charity. AP Photo/John Shearer, Pool

LOS ANGELES – Britain’s Prince William and his new wife Catherine headed home Sunday after a 12-day north American tour during which they were greeted as rock stars, and even outshone Hollywood celebrities.

The royal couple, making their first official overseas trip since marrying in April, was feted from Canada’s far north to the Californian sun of the US west coast.

Apart from a few protestors in Canada’s French-speaking province of Quebec, the public hailed the newlyweds as the new down-to-earth modern face of the British monarchy.

The royal couple, both 29, will likely be exhausted and looking forward to returning to their cottage in north Wales after the busy visit, which began on June 30.

In Canada, the duke and duchess of Cambridge paddled in a canoe in the far north, shared the grief of thousands displaced by forest fires in Alberta and snuggled in a rustic wooden cabin in the Rockies.

Huge crowds turned out daily to welcome them and millions more watched their adventure on television.

On their last Canadian stop in Calgary, the couple took in a night of rodeo chuck wagon races, bull riding and “mutton busting” for kids, and rode in 1912 stagecoach, all part of Calgary’s world-famous annual Stampede.

Prime Minister Stephen Harper called the trip “the beginning of a beautiful and lasting friendship, one of deep affection and loyalty … We look forward to sharing more of our splendid country with them on their next Royal Tour.”

“I say, we haven’t seen a love-in like that since the first visit of the Beatles!” Harper told a private reception. “Indeed, everywhere you went you left a trail of utterly charmed Canadians in your wake.”

William will one day become head of state of Canada, a member of the Commonwealth which is mostly proud of its British connections, so its choice as the prince’s first post-wedding trip was a fairly safe move.

California was a less obvious one – but the couple had few problems charming the West Coast during a lightning three-day visit which started when they landed in Los Angeles on Friday.

The highlight of the weekend was a black-tie dinner for Hollywood A-listers including Tom Hanks and Nicole Kidman on Saturday night.

Hundreds of fans gathered outside the Belasco Theater in downtown LA, cheering as the usual celebrities arrived for the red carpet entry – but screaming the place down when William and Catherine arrived.

On Sunday the couple visited a children’s arts project in the deprived Skid Row area of downtown Los Angeles, before a final event honoring US servicemen and helping them and their families.

Catherine has drawn admiring comments for her elegant style and dress sense – she reportedly brought 40 outfits for the 12-day trip.

On Friday she wore a vibrant green Diane Von Furstenberg dress in the evening. At the polo she was in a silver and marble grey number by Jenny Packham, before switching to a flowing lilac dress by Alexander McQueen.

One criticism initially made of the California leg of the trip was the lack of contact with the public – they did lots of walkabouts in Canada, but security appeared to be tighter in Los Angeles.

But this was rectified when they slipped the protocol to shake hands with fans at the Saturday night celebrity event, and they did so again on Sunday morning, before their Skid Row visit.

Fans at the Hollywood red carpet made it clear that the British royals were the stars of the show.

“They’re not just actors, their position is so much greater,” said LA local Sarah Pijuan, 28, after meeting the British royal couple at the end of the red carpet.