LA bear who became Twitter star back in wild 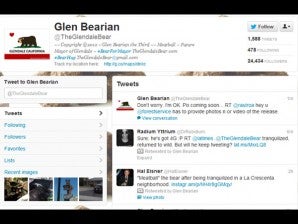 LOS ANGELES – A bear which became a minor star in Los Angeles, with over 24,000 Twitter followers, was returned to the wild Sunday after being found asleep in a tree, officials said.

The bear was nicknamed “Glen Bearian” after the Glendale neighborhood where he had become a regular visitor, with residents posting pictures taken on cellphones. Others called him Meatball.

The Los Angeles Times wrote about him Friday, calling him a “social phenomenon” who had built up an affectionate following via his Twitter persona, created by a local resident and embraced by thousands of others.

The animal – Twitter handle @TheGlendaleBear – proclaimed his love for food in trash cans but also tweeted about the Egyptian revolution, and even promised to challenge reality TV star Kim Kardashian for mayor of Glendale.

But the newspaper also noted that, if authorities were forced to kill the beast, “there will be a lot of explaining to do.”

The Glen Bearian broached the difficult issue himself, tweeting: “”Yo tweeps: who wants me to die? Keep leaving food out & taking pics. ¿#SeeYouInHeaven.”

Sarah Aujero, 29, owner of the Twitter handle @TheGlendaleBear, warned: “If they kill the bear, they’d better bury him at (local celebrity cemetery) Forest Lawn next to Michael Jackson. I’m not kidding. They have to.”

On Sunday there was a happy ending – for now, at least – after Glen Bearian was spotted sleeping in a tree. Police and California Department of Fish and Game officers blocked off the area and evacuated residents.

They woke up the bear by firing bean bags at him. As the startled beast scrambled down he was hit by tranquilizer darts. He managed to run for two blocks before being found asleep outside a local school.

They then loaded him onto a truck and took him to a remote area of the Los Angeles National Forest, a long way from Glendale.

But it may not be over yet. @secretaznman2 tweeted a short time later that he “wonders how long will it take for @theglendalebear to return?” To which @TheGlendaleBear tweeted: “Place Your Bets!”