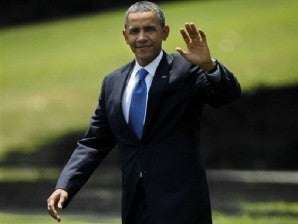 President Barack Obama waves as he walks across the South Lawn of the White House in Washington, Thursday, June 28, 2012, before boarding the Marine One helicopter. Obama was traveling to Walter Reed National Medical Center in Bethesda, MD., to visit with members of the military. AP/Pablo Martinez Monsivais

BIRMINGHAM, Alabama—An Uzbek man who pleaded guilty to plotting to assassinate President Barack Obama was never admitted to Columbia University’s medical school, the university said Saturday, contrary to defense claims before he was sentenced to more than 15 years in prison.

The disparity could be a misunderstanding linked to language problems, a defense attorney said, but it also could raise questions about Ulugbek Kodirov’s credibility and the information he is giving to investigators of terror threats against the United States.

A federal judge sentenced Kodirov, 22, on Friday for plotting to kill Obama. Kodirov could have gotten a sentence twice as long, but U.S. District Judge Abdul K. Kallon agreed to prosecutors’ request for a shorter term because the man has provided substantial assistance that the government believes to be truthful.

Prosecutors would not disclose what sort of information Kodirov has provided to investigators, but evidence showed Kodirov believed he was communicating with an Islamic group in his native Uzbekistan that the United States classifies as a terrorist organization.

The Columbia University claim was important to the defense narrative because it explained how Kodirov moved to the United States and wound up in Alabama, where he tried to purchase a weapon to kill Obama last year before his arrest.

Defense lawyer Lance Bell told the judge Kodirov was accepted to Columbia’s medical school, received a U.S. student visa and moved to New York but then couldn’t enroll at the prestigious school because his English was too poor. Unable to find work in New York, Kodirov moved to Alabama and turned against the United States after contacting Islamic extremists on the Internet out of loneliness, Bell said.

But Columbia spokesman Doug Levy said Kodirov never was accepted to the university’s College of Physicians and Surgeons.

“From the immediately available records we have no knowledge of this individual and no record of him being an accepted student,” Levy said.

Besides, Levy said, it’s doubtful that anyone with limited English proficiency could even make it very far in the school’s admissions process.

“We certainly have students whose primary language is not English, but all of (the) application process and the interviews are conducted in English, as is our instruction,” he said. “We seek a diverse population of students but they have to be able to effectively communicate with their peers and professors at the outset.”

Federal prosecutors did not immediately return messages seeking comment. But Bell said Kodirov has been “100 percent truthful” with the government and still believes he was admitted to medical school at Columbia.

“Somebody had to give him something for him to get his student visa. He said it was Columbia,” said Bell. “That’s where he planned to go.”

A spokesman with U.S. Immigration and Customs Enforcement did not return an email seeking comment on Saturday.

The attorney said Kodirov’s English skills are limited and they were worse when he came to the United States in late 2009 while just 19, so he may have mistakenly believed he was admitted to Columbia. But Kodirov still maintains the only reason he enrolled in an English-language program in New York was because he could go to medical school at Columbia if he improved.

Kodirov pleaded guilty in February to threatening to kill the president, providing material support to terrorism and unlawfully possessing a firearm. He said he came up with the plan to kill Obama as he campaigned for re-election after communicating over the Internet with a man he believed to be a member of an Uzbek Islamic group the United States classifies as a terrorist organization.

Court records show Kodirov received a student visa to enter the United States in 2009 at Tashkent, Uzbekistan. He arrived in New York on June 19, 2009, but his visa was revoked on April 1, 2010 since he didn’t enroll in school. He faces deportation after his release.

Kodirov was living in suburban Birmingham and working at a mall kiosk at the time of his arrest last year.