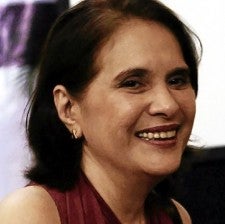 MANILA, Philippines—Members of the Makabayan Coalition, made up of progressive parties, mourned the passing of its founding co-chairperson, former beauty queen and political activist Maita Gomez, 64, who died in her sleep Thursday.

Bayan Muna, Anakpawis, Gabriela, Kabataan, COURAGE, Migrante, ACT Teachers and Katribu expressed their sadness over Gomez’s death, remembering her as a woman who “never failed to speak out on the issues being discussed and her points were always well-taken–reflective of her intellectual acumen and wisdom, built up from a multifaceted life and deep involvement in our people’s struggle.”

Makabayan president Satur Ocampo said that they were proud and honored to have worked alongside Gomez who “gladly accepted her nomination to co-chair the coalition in 2009, and she consistently and most capably performed her duties until her unexpected demise.”

He further described Gomez of having been “a selfless and dedicated fighter-organizer among the masses in the countryside” during the Marcos dictatorship.

“Maita has etched her indelible mark in our people’s struggle, yet she retained her humility throughout and, yes, her peculiar sense of humor,” said Ocampo.

Gomez died while taking an afternoon nap in her Quezon City home and was later discovered dead by her son.

Her remains are at Funeraria Paz at the Manila Memorial Park.