Manila City Hall gets P20M to save ‘Botong’ mural 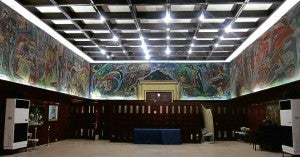 A national treasure has come under threat because of Manila City Hall’s leaky plumbing.

The Department of Tourism Tuesday donated P20 million to the Manila city government for the restoration of a 49-year-old mural by acclaimed artist Carlos “Botong” Francisco.

The mural titled “Filipino Struggle Through History” has graced the upper walls of the Bulwagang Gat Antonio Villegas at the mayor’s office since 1963.

The elaborate three-panel mural by the late National Artist from Angono, Rizal province, showcases the history of Manila, from the pre-colonial reign of the rajahs to the American period, as well as the heroism of Dr. Jose Rizal and Andres Bonifacio.

Manila’s engineering department recently reported that a plumbing problem had caused water to seep through a portion of the mural. The leak was traced to the floor above the hall.

Gemma Cruz Araneta, former tourism secretary and now vice chair of the Manila Historical and Heritage Committee, suggested that Manila Mayor Alfredo Lim seek the help of the Tourism Infrastructure and Enterprise Zone Authority (Tieza) to save the painting.

On Monday, Lim and Tieza general manager Mark Lapid signed a memorandum of agreement for the restoration of the mural and for the turnover of the P20-million donation from the Department of Tourism to cover the restoration costs.