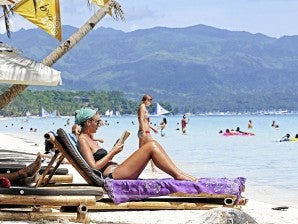 Boracay is a favorite destination in the Philippines for foreign tourists. INQUIRER FILE PHOTO

ILOILO CITY, Philippines — Business operators on Boracay island have embraced its new distinction as the world’s best island destination for 2012.

But they raised the need for additional infrastructure and environmental protection to retain its world-class features.

“It is, of course, a very welcome development but it would be difficult to maintain our position,” said Dionesio Salme, president of the Boracay Foundation Inc. (BFI), an organization of business owners and operators on the island.

Salme said the recognition given by the prestigious Travel+Leisure Magazine reaffirmed Boracay’s fame as having one of the best beaches in the world.

The island, known for its powdery-white sand and clear waters, topped the magazine’s 2012 World’s Best Awards with a rating of 93.10, beating the popular Indonesian destination Bali Island, which ranked second with 90.41. Boracay ranked fourth in the same category in 2011.

The magazine’s annual World’s Best Awards rates hotels, islands, destination spas, golf resorts and rental-car agencies. The ranking is based on an online survey among its readers.

Also cited in the awards was the Discovery Shores Boracay resort, which ranked fifth in the top 100 hotels in the world (from 55th last year) and second top resort in Asia (from 8th last year). The posh resort also bagged the best hotel spa in Asia award.

Salme said a lot should still be done in addressing the infrastructure needs of the island, which would likely draw more than a million tourists in 2012.

He cited the need to complete the drainage system to address the flooding in areas of the island, especially during the rainy season.

There is also a need to develop the Tabon jetty port in Caticlan, which serves as an alternative jump-off point to Boracay during the southwest monsoon.

The island’s road network also needs to be improved and that includes the completion of the circumferential road which residents hope will address the worsening traffic problems on the 1,032-hectare island.

But he said the biggest challenge has been and would continue to be the island’s environmental problems, which have been blamed on decades of unregulated construction and development projects.

She said various sectors including the government should work hard to ensure that the island could cope with its continuing popularity.

“Other destinations will overtake us if we do not preserve the island’s environment and ensure that development is regulated,” Catalbas said.

She said the government has intensified its monitoring against bringing out sand from the island.

Several tourists have been intercepted at the Caticlan airport and jetty port with water bottles and plastic bags filled with sand from the island that they intended to bring home as souvenirs.