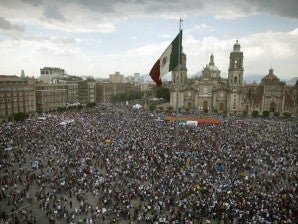 PROTEST VS PENA NIETO. Members of the movement "YoSoy#132" and civil organizations take part in a concentration at the Zocalo Square to protest against the presidential election win of Enrique Pena Nieto on July 7, 2012 in Mexico City. Tens of thousands of demonstrators marched through Mexico City Saturday accusing Pena Nieto and his party, the Institutional Revolutionary Party (PRI), of widespread vote-buying. AFP/YURI CORTEZ

MEXICO CITY—Tens of thousands of demonstrators marched through Mexico City Saturday against the presidential election win of Enrique Pena Nieto, accusing him and his party of widespread vote-buying.

“Out Pena, Mexico without the PRI!” the protesters chanted as the massive crowd made its way down the Paseo de la Reforma — a main thoroughfare in the capital — to the Zocalo, the city’s giant downtown square.

But many in this country of 112 million have refused to accept Pena Nieto’s victory, which marks the return to power of the PRI — the party that ruled for seven decades until 2000, amid accusations of rigged elections and repression.

“We would look really bad if Pena Nieto would take office and we did nothing,” said Mara Soto, a 21 year-old student at the National Autonomous University of Mexico (UNAM).

Lopez Obrador, from the Party of the Democratic Revolution (PRD), also came in second in the 2006 presidential election, that time by the slimmest of margins — less than one percentage point.

He led protests that virtually paralyzed Mexico City for more than a month, claiming fraud in the contest in which outgoing President Felipe Calderon was elected.

Lopez Obrador however has said he was not behind Saturday’s march, which was mainly organized online via Facebook, Twitter and activist blogs.

Students of the #YoSoy123 protest movement, who have led several Mexico City marches in the past weeks, also said they did not organize the demonstration.

Pena Nieto, 45, is set to take office in December. He inherits a country beset by a brutal drug war and an economy struggling to create jobs.

Most of the marchers on Saturday appeared to be in their 20s, but families with young children and plenty of middle-aged protesters also attended.

“I’m not young, but I’m with you!” cried out Noe Santillan Ortiz, 50, who addressed the crowd from the base of the Angel of Independence monument, where the march began.

He then screamed himself hoarse leading expletive-laden anti-PRI chants. The crowd followed and roared with approval.

Gabriel Mendoza, a 54 year-old carpenter, said he learned about the march through his children, all young adults.

Pena Nieto “took advantage of the need of poor people to buy votes,” Mendoza said, pointing to a yellow gift card from the Soriana supermarket chain allegedly handed out by the PRI. The card had the logo of a pro-PRI union.

Immediately after the vote, Soriana supermarkets were swamped with people armed with yellow gift cards they said came from the PRI, fearful that the cards would be canceled after the election.

The PRI has said it ran a clean election, and Soriana said the cards with union logos are part of a special buyer’s program.